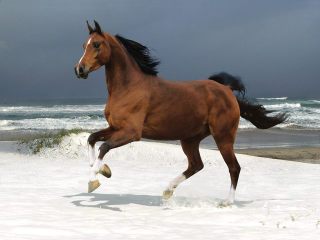 Did Equine Eve look like this horse? Italian geneticists have traced the mitrochondrial DNA of 83 horses from around the globe and have determined that these horses shared a common ancestor.  She is approximately 140,000 years old, and the researchers have named her 'Equine Eve.'

While researchers have not found archaeological evidence of Equine Eve to date, researchers reconstructed the  "Ancestral Mare Mitogenome (AMM), representing
the mitochondrial DNA (mtDNA) of the most recent common female ancestor of
modern horses," said Allessandro Achilli, assistant professor of Genetics in the Department of Cellular and Environmental
Biology at the University of Perugia, Italy.  "Then, by counting the number of differences between
this ancestral mtDNA and the mtDNAs of modern horses we were able to establish
when this ancestral mare was living."

This was the most complete mitochondrial analysis that has been performed to date, and it determined that the modern, domesticated horse came about 10,000 years ago during the Neolithic period in about 17 different geographic locations, mostly in Eurasia.  An 18th group, identified as the Przewalski, is classified as a modern horse, but it has never been domesticated. Achilli indicated that additional genetic lines of Equine Eve existed, but were lost due to severe climatic conditions occurring during those 140,000 years.

The significance of this study is two-fold, one being historical insight, and the other being the opportunity to use this information in breeding future horses, race horses for example.

"Mitochondria are the power generators of cells, and mtDNA
(is) implied in energy production," Achilli said. "(This could be) the first case of
a 'measurable' genetic component related to performance variability, an
innovative selection criterion for broodmares."