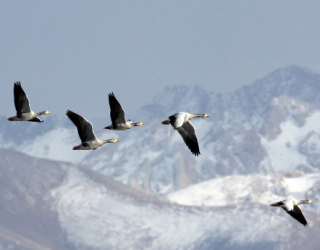 Some humans seek out the Himalayas as a spiritual retreat - some for communing with nature - others for trekking to the highest peaks — but none I think would equate those majestic mountains to an amusement park ride. Additionally, either would migratory birds. But there is a rare breed known as the bar-headed geese (Anser inducus) — who while I’m sure  have never been to Disney World  — use the Himalayan Mountains as a wild and wooly ride, analogous to the thrill of a roller coaster. 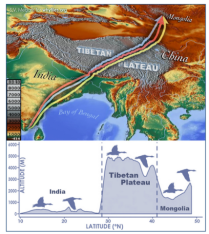 Each autumn, bar-headed geese migrate from their breeding grounds in Mongolia to Southwestern Tibet in China and India and have been distinguished as the world’s highest-flying birds. Reaching heights as high as Mount Everest at 29,029 feet — an altitude that most humans would require supplemental oxygen to move. On average, the migration ranges a vast distance ranging up to 900+ miles and taking as long as 80+ days.

But can Big Birds ascend to lofty peaks?

New research has been conducted by zoologist Charles Bishop at the University of Bangor to understand how these birds that weigh more than 98% of all birds can thrive in an atmosphere of thin air and limited oxygen — particularly since they have to work extra hard to stay airborne and on course.

“We wanted to know how high they flew, what were their flight paths and strategy with respect to the weather conditions, how difficult did they find these journeys, and how much energy did it require,” says Bishop.

In the lab, they coaxed geese into running on treadmills in reduced oxygen to simulate high altitudes. This task  revealed that the birds could keep running at top speed for 15 minutes. Humans would not be able to sustain that pace in such conditions. “They have an exceptional ability to keep exercising in low-oxygen environments,” Bishop says.

Scientists have long believed that bar-headed geese spend their entire migration at these altitudes, where only a favorable tailwind might aid them. But Bishop’s study, which follows up on previous research on the topic, shows that these birds actually change altitude as they traverse the Himalayas, hugging the mountainous terrain. By flying close to the ground as the mountainside rises and falls, their flight pattern is reminiscent a roller coaster ride.

Descending doesn’t seem to affect these birds much – it’s just gravity essentially taking hold. But if you considered how

much energy they expend scaling upward, this sporadic and thrill-seeking flight technique might seem wasteful. Yet the actual fact is migrating birds are aided by a phenomenon called orographic lift.

“If a wind hits a mountain ridge in the ground or a large wave at sea, then some of it will be deflected upwards and create an updraft,” Bishop said.

“A bird can use this to help it when climbing – it increases [the bird’s] rate of climb, reducing the energy required to climb at some rate, or a bit of both. When flying horizontally, it decreases the energy that needs to be supplied to the air to fly along.”

Such a glorious gift to be able to experience such a voyage, don't you think?

And for those who believe in reincarnation, one could 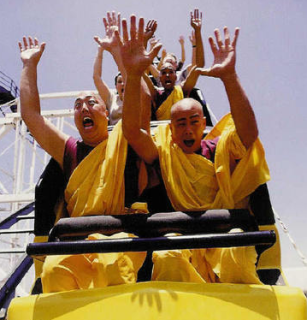 almost imagine a flock of these migrating birds as Buddhists monks serendipitously returning to their homeland in a second life!

Now that’s a flock of fun-loving creatures who would have known all about Disney World!

Want To Invite More Hummingbirds To Your Home? Help Them Build Their Nests!
Comments