Visitors to the Smithsonian National Zoo yesterday got quite a surprise at the Dama gazelle exhibit: a live birth.  Mother Adara and father Raul became parents of a bright and sprite male baby, anxious to get started from the moment he was born. 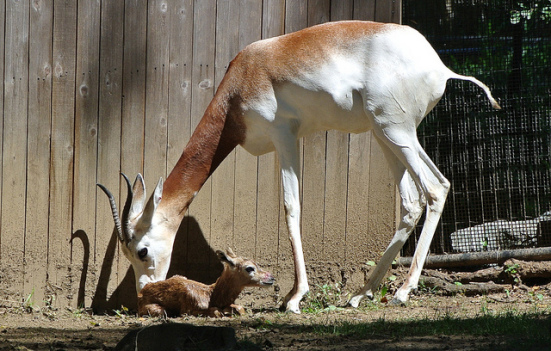 Just moments after his birth, the baby Dama gazelle tries to stand, as we can see from this beautifully-timed video.

It is very rare for a zoo visitor to observe a live birth, as mothers are usually restricted to a sheltered area prior to their labor in order to keep them calm.  The birth went well, however, and now the mom and her new son will be restricted from view for a few months so they can devote their attention to each other.

The Dama gazelle, native to the Sahara Desert, is a critically endangered species, with only an estimated 500 living in the wild, and that number is at a great risk of being extinguished by hunters and poachers. To most native Saharans, however, the Dama gazelle is a revered animal and, in fact, the Dama is the national symbol of Niger, in its national language known as meyna or ménas.