While lowland bongo antelopes are fairly plentiful throughout Western and Central Africa, mountain bongos are critically endangered. It’s a good thing that conservation groups are banding together to save the rare beast. 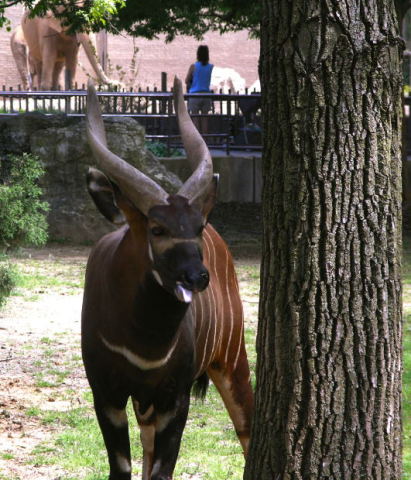 A bongo is a large jungle antelope that is easily identified by its tall, vertical spiral horns and the white stripes that run down the animal’s bright brown fur. There are two separate species of bongos, the common lowland bongo and the extremely rare mountain variety. Lowland bongos are widespread across Angola, Gabon, Ghana, and other heavily forested nations, but mountain bongos are only found in Kenya. 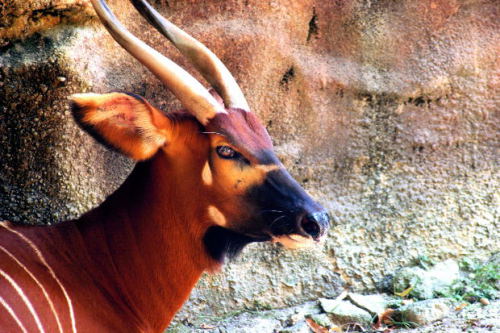 This wouldn’t be an issue if there weren’t less than 100 mountain bongos in the wild!
Sure, mountain bongos are preyed upon by leopards, hyenas and the occasional lion, but the reason for the drastic drop in the sub species’ population is the rampant overhunting for their beautiful fur, stunning 25in. long horns and “bush meat.”

Conservation groups, like the Al Bustan Zoological Center, located in the United Arab Emirates has a dedicated breeding program to rebuild the population of these dwindling antelopes, while promoting a healthy genetic diversity of the species. The Al Bustan zoo regularly trades mountain bongos from the 700 individuals located in zoos around the world to ensure that their breeding program is a success.

The real question is whether the mountain bongo, which is nearly extinct in its native Kenya, can make a comeback in the wild due to the consistent illegal poaching of the animals. Although I’ve enjoyed the Jacksonville Zoo’s native lowland bongos year after year since 1999, I had absolutely no idea that there was a variety of bongo that faces extinction until recently.

Do you have bongos at your local zoo? If so, are they mountain or lowland bongos? Share your antelope experiences in the comments below!

A Dog Is Not Called "Man's Best Friend" For Nothing

A Yummy, Healthy Diet For Birds: ZuPreem® Wins 2019 Bird Food Product Of The Year
If Dogs Act Like Humans, Might They Be Able To Shrink You?