Northern fur seals usually hang out along the northwest coast of North
America and the Aleutian Islands, but one fur seal somehow managed to
end up stranded on a beach in Hawaii. It was found thousands of miles
from home resting on the sand near Sunset Beach on Oahu’s North Shore.
The poor thing was emaciated, 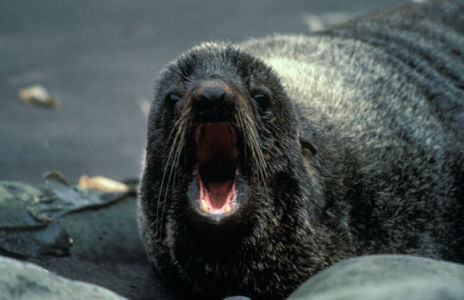 Northern Fur Seal (Public Domain Image)exhausted, and weak. It is the first time
that a wild fur seal has shown up in the island paradise.

Hawaii's only native seal species is the endangered Hawaiian monk seal. Once in a great while an elephant seal has made the journey from California.

No one knows how the young female fur seal managed to end up so far south. She was taken to the Honolulu Zoo for some much needed TLC. They want to prevent any diseases she may be carrying from spreading. Northern fur seals have been known to carry the virus
morbillivirus, which could devastate the already shrinking Hawaiian monk
seal population. These seals have no resistance to the disease after living in the isolation of the islands.

Officials are hoping to send the fur seal to the Marine Mammal Center
in Sausalito, California. There they have the facilities and extensive experience nursing sick and
injured seals back to health.