Hair of the Dog before St. Patrick's Day? It goes with the territory when you're Man's Best Friend but with one important difference: dogs don't drink and they don't get drunk without irresponsible human connivance. That's their story and they're sticking to it – photographic evidence to the contrary. (drunk dog image via Fernando Carmona Gonzalez)

Why not both? Yeah, you know your taste in bubbly brews has gone to the dogs when even they won't have anything to do with it. Seriously, look at that guy, staring down that bottle-in-front-of-me like it was a frontal lobotomy. (drunk dog image via Mitch Pond)

If dogs could talk, this somewhat shamed-looking canine might say something like “I'm all thumbs when it comes to drinking from a glass, probably because as a dog I HAVE no thumbs.”  While that may be technically correct, one look at the mostly-drained wine glass tells us thumbs or not, you've been a very naughty dog! (drunk dog image via ilan sharif)

Drinking, smoking and passed out is no way to go through life, son... er, son's dog. Give credit where credit is due, however - at least he or she isn't gnawng on the furniture, pawing the other party guests, or starting fights for no discernible reason. At least not yet... it's kinda hard to do that stuff when you're unconscious. (drunk dog image via Caleb Zahnd)

Remember Spuds MacKenzie, the cooler than cool Bull Terrier spokes-dog who flogged Bud Light for Anheuser-Busch in the late Eighties? Ol' Spuds made pop culture history in early 1987 during Super Bowl XXI, subsequently selling millions of dollars worth of beer and beer-related merchandise over the next few years. Not many know it but Spuds was more of a walking contradiction than Travis Bickle – and the disturbed Taxi Driver walked on two legs, not four. Y'see, in addition to being a terrier teetotaler, Spuds wasn't exactly the womanizer “he” was made out to be... yep, Spuds (1983-1993) was a female whose real name was "Honey Tree Evil Eye". Don't know about you, but I'd rather drink beer promoted by a dog named Honey Tree Evil Eye than by one named Spuds MacKenzie. (drunk dog image via Michelle Ress) 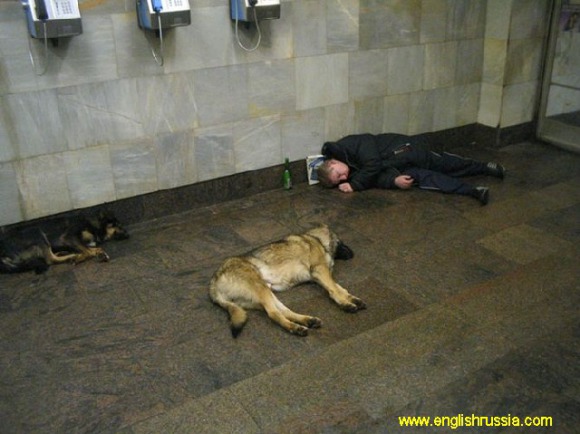 Ever heard the expression “let sleeping dogs lie”? It goes double for sleeping-it-off dogs, triple for sleeping-it-off Russians, and quadruple for sleeping-it-off Russian dogs. Got that, comrade? Petula Clark scored smash hits with “Don't Sleep in the Subway” and “Downtown” back in the Sixties but nearly 50 years of airplay hasn't dissuaded drunken Muscovites (or their pets) from doing just that. You'd think those cold, hard stone floors wouldn't be conducive to a restful sleep but hey – Russian vodka trumps cold, hard stone floors any day of the week. Besides, compared to the snowy sub-zero winter wonderland lurking on the gritty city streets above, crashing in the Moscow subway isn't quite the train wreck it's made out to be. (drunk dog image via English Russia)

Drunk Dog #6: The Most Interesting Poodle in the World

"I don't always drink beer but when I do, I crash out on the armrest of my humans' couch." That's Dos XX's for "Chabelita" and if she gets one more strike, she's OUTTA HERE! (drunk dog image via Gabriel Saldana)

Friends don't give friends' pugs cans of Coors Light... the stubby beasts don't know how to open them and only end up shaking the contents to dangerously explosive levels. We're sure Coors Light devotees far and wide are cringing at the thought of that delicious, "brewed with Rocky Mountain spring water" brew going to waste... ahh, that's right, Coors Light doesn't HAVE devotees. (drunk dog image via DaPuglet)

So you've had a few wobbly pops and you're in the mood to belt one out. What tune could the lab lush above be mangling? One can only hope it isn't “Who Let The Dogs Out?”. Could be worse, of course (Jingle Dogs comes to mind) but consider the improbable decade-old hit by Baha Men made it all the way to #2 on AOL Radio's “100 Worst Songs Ever” listing. It would've surely surged to #1 if it had actually been sung by a drunken dog. (drunk dog image via Kevin Rodriguez Ortiz)

You're celebrating St. Patrick's Day by drinking with friends and spinning tall tales. That's good! When the tale's been told and the room's doing the spinning, however, that's not so good. Lucky for you there's nobody around with a smartphone snapping pics of you doing an imitation of a clothes dryer from the inside (naked, we might add - yikes!), and then posting said pics on Facebook... I mean, that hardly ever happens. Hey, could be worse: you could be the next YouTube star, just like that Double Rainbow Guy. He didn't have a job, of course, but once the pics reach your boss's inbox neither will you. (drunk dog image via Michalis Famelis)

Sooner or later, every party's got to come to a bitter end and the longer the party, the more bitter the end. “You'll get my beer and cigarettes when you pry them out of my cold, dead paws,” they snarl, unwilling to accept the fact that every good times train eventually reaches the end of the line. Why is that, anyway? Maybe alcohol-induced memory loss makes us want to hold onto our partying experiences in real time as long as possible. Also, doesn't this lampshade make a great fez?

Ah well... now it's time to get serious. Fun, games and anecdotal evidence aside, the ASPCA's Animal Poison Control Center advises that alcoholic beverages are one of a variety of “people foods” that should not be fed to dogs. To quote, “Dogs are far more sensitive to ethanol than humans are. Even ingesting a small amount of a product containing alcohol can cause significant intoxication,” which can cause “vomiting, loss of coordination, disorientation and stupor. In severe cases, coma, seizures and death may occur.”  Loving our pets means taking responsibility for them and drinking responsibly means not sharing, but if your pet really deserves a toast this St. Patrick's Day then look into the surprising variety of safe lookalike beer, wine & cocktails designed to be pet-safe. (drunk dog image via Czarina Alegre)

The World's Most Patient Cat -- Animal Video of the Day!!!

Cram That Food In! The Chipmunk Animal Video Of The Day!!!
PetsLady's Pick: Cute Snow Pals Of The Day
Comments