There is something about having so many legs and a venomous set of legs known as forcepules that
render centipedes as candidates for the fugly hall of fame. They are
the stuff of nightmares and horror films, not to mention frightened
squeals if one darts out at you unexpectedly. 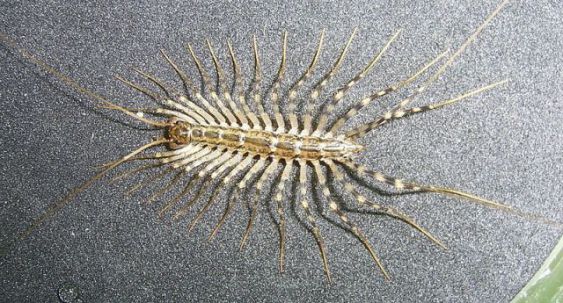 This segmented arthropod has one pair of legs per body segment. While centipede means 100 feet, a centipede can have more than 300 legs down to less than 20. Curiously they always have an odd number of pairs of legs.  They can range in size from a couple of millimeters to about a foot. Each pair of legs is longer than the previous pair to keep them from getting tangled.

While the bite of some centipedes can be extremely painful and cause fever, sweating, and chills, it is rarely fatal for adults. In some cases the bite can cause an anaphylactic reaction which can result in death. Smaller centipedes are unable to break through human skin.

It is estimated that there are about 8,000 species of centipede, but only about 3,000 have been identified. That's a whole lot of fugliness out there waiting to be discovered.