Free Bird: Shoebill Rescued From Poachers Returned To The Wild

Kapotwe, the shoebill, was just a "tiny" chick when she was captured by
poachers and held inside a grass hut in a small fishing village. Zambia
Wildlife Authority scouts found her nda rescued her before she could be
sold to 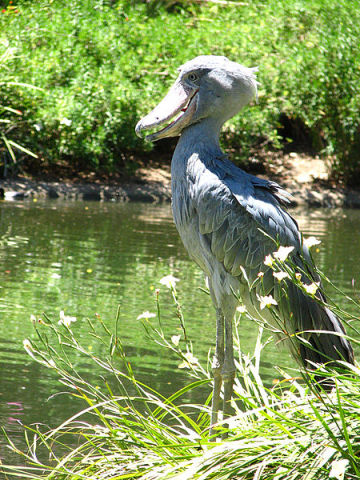 Shoebill (Photo by Parkerman & Christie/Creative Comons via Wikimedia)a zoo or private collector. Now that she is all grown up it is
time for her to fly.

Shoebills are large, stork-like birds that grow to be four to five feet tall. They are named for the odd, shoe-shaped bill. They are also known as the whalehead stork or the shoe-billed stork, even though they are not storks. Native to eastern Africa, they live in swamps and feed on fish, frogs, and snakes. Shoebills are also known for getting down and boogieing with some serious dance moves.

Once Kapotwe was rescued she was taken to the Bangweulu Wetlands research station at Chikuni Island. There they hoped to bring her back to full health and return her to the wild in short order. As with many best laid plans things did not go accordingly. It turned out that Kapotwe had never learned to fish or handle danger. So the station staff found themselves with a bit of a pet. She loves humans and is always curious about what they are doing.

Every morning while living at the station she would go out and check on the traffic along the path to the village and get into trouble with the fishermen for stealing from their nets. She would also mingle with other birds and animals in the area. Her caregivers worried that she would never learn to fend for herself, but their fears have turned out to be unfounded. '

On her own she began to venture further away from the research center and become more accustomed to wilderness. Now that she has learned to fend for herself, the large bird has been set free. She will be unique among her kind, though. Most shoebills never even see a human in the remote swamplands that they prefer and Kapotwe was raised by humans.

While not threatened with imminent extinction, shoebills are listed as vulnerable.

Birds
Conservation
News Stories
Rescue
Wildlife
What Is Chasing This Dog? The Animal Video Of The Day!!!