Massive frog deaths have been happening world-wide from a fungus that
causes dehydration, electrolyte imbalance, and cardiac arrest among all
species of frogs. It is threatening many of the species with extinction
as populations have been slashed by as much as 75% over the last four
years. 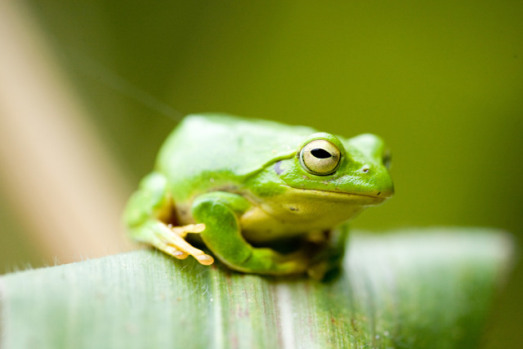 Researchers from the University of California at Berkeley and San Francisco State University found that the aquatic fungus Batrachochytrium dendrobatidis, which is responsible for the disease chitridiomycosis, or chitrid for short, has been racing through frog populations worldwide. They were actually able to study the outbreak from the time it started in the mountain yellow-legged frogs in the Sierra Nevada.This population has decreased by 95% since the fungus was first detected in 2004.

The chytrid fungus increases the thickness of the amphibian's skin by as much as 40%. Since frogs absorb most of their fluid intake through the skin, the infected frogs become dehydrated, have electrolyte imbalances, and die from cardiac arrest as a result. Salamander populations are also being infected by the fungus. It is believed that the disease originated in southern Africa and may have been spread through the trade in amphibians for zoos and private collectors, or for pregnancy testing in Europe.

These researchers are trying to find out as much as they can about the disease with the hope of being able to find a way to treat the infection. They are looking at ways to treat the frogs with antifungals and probiotics. The disease is easy to cure in a laboratory setting, but much more difficult in the wild. Treating individual frogs with electrolyte supplements is showing some promise.

Chytrid has already killed off more than 200 species of amphibians.