Jonny Justice, a pit
bull rescued  and rehabilitated from the
infamous fighting ring of NFL player Michael Vick, is a real softie.  Since his rehabilitation, he has been adopted
by a loving father and even spent time as a children's reading companion
through a public library program in California.
Now the adorable black and white pit bull will show his softest side
ever, as a limited edition stuffed animal from the GUND plush toy company. 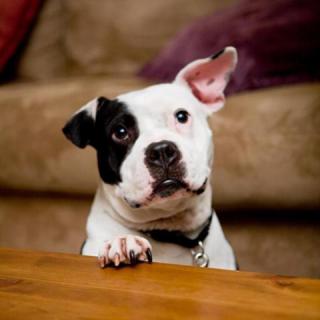 A contest recently
held on Facebook summoned photographs of dogs in the categories of Most
Beautiful Dog,  Ugliest Dog, Best Dressed
Dog, and Dog that Most Resembles its Owner.
Facebook users could then vote daily for their favorite
submissions.  The owner of the top vote
recipient in each category was awarded $250 in GUND plush toys.  Then a single favorite  was selected by a panel of judges from
the four category winners and was awarded the Grand Prize, the use of the dog's
likeness for a new GUND stuffed animal! 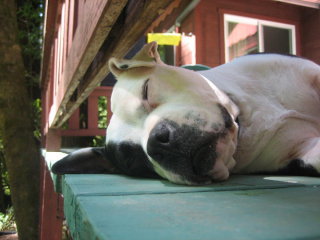 Jonny Justice's
photo won the category of Most Beautiful Dog.
Besides winning votes for his dashing good looks, some voters commented
that they were happy to select Jonny Justice as a symbol of hope and love in
the face of his challenges and those of his breed.  Other contest voters considered a vote for
Jonny to be a symbol of justice for the dogs who did not make it.

The GUND Company has
not revealed when the new stuffed animal Jonny Justice will be released.  In addition to the Grand Prize, Jonny's owner will receive 24 of the stuffed toys once they are released.  In a generous display, he has announced Jonny has graciously insisted that their prize will be donated to children at Family House in San Francisco, a non-profit organization that provides temporary housing to families of children hospitalized for serious illnesses.  This is one beautiful dog who just keeps giving back.   Undoubtedly, he has many fans who are looking forward to getting their very own sweet Jonny Justice.