'Flight Of The Bumblebees' Cancelled Due To Weather & Maintenance Disruption [Videos]

Composed by Nikolai Rimsky-Korsakov for his opera, The Tale of Tsar Salton (circa 1899-1900), the "Flight of the Bumblebee" is one of the most recognizable orchestral pieces to stand the test of time. Unfortunately, that haunting refrain just might outlive our bee population, leading many to wonder if the demise of the bee is a case of the "canary in the mineshaft?" 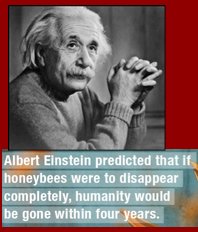 Albert EinsteinGenius Albert Einstein was of one of the first to call our attention to the impending doom of this species. In a oft-quoted reference, he presented a foreboding that many anti-environmentalists have disputed for years: "If honey bees were to disappear completely, humanity would be gone in four years."

He was specifically alluding to the symbiotic relationship all living creatures have with each other as we cohabit this planet. If we're all essential parts of a vast interconnected biosphere, and each living organism plays an essential role dependent on others, a domino effect could occur if one falters. Which begs the question: If any part of the global body suffers, will the entire ecosystem?

Tiffany ShlainTreated from a metaphorical perpective, filmmaker Tiffany Shlain artistically focuses on this interconnectedness in her documentary, CONNECTED: AN AUTOBLOGOGRAPHY ABOUT LOVE, DEATH & TECHNOLOGY. Underscoring her theme of human lives moving from independence to interdependence, Shlain's visuals are compassionate eye-candy, as she weaves personal loss into man's need for connections and cross-pollination, while continually asking the thought-provoking question: "Where have all the honeybees gone?" along the way.

A series of hurricanes since 2004, specifically Katrina in 2005, destroyed thousands of honey bee colonies,

decimating the vital Gulf Coast bee industry. Much of the pollination needed by other parts of the country traditionally came from these beekeepers. The economic impact of these storms is yet to be determined.

According to a Target Health update, most folks would be surprised to learn that 90% of the feral (wild) bee population in the United States has died out, and the UK and the Netherlands have shown bee diversity to be down 80%.

The debate as to why continues to this day. While commercial beekeepers in 22 states have reported deaths of tens of thousands of honeybees colonies, many are labeling this phenomenon, the "Colony Collapse Disorder (CCD)" This is a condition where honeybees mysteriously abandon their hives and disappear in large numbers. “There have been cases where there have been these die-offs of bees before, but we have never seen it to this level,” said Maryann Frazier, a Pennsylvania State University entomologist. “One operation after another is collapsing.”

Harvard University's Chensheng Lu, one of the world's leading CCD researchers noted the following: "I believe one reason that commercial beekeepers are experiencing the most severe colony collapse disorder is because of the link between high-fructose corn syrup and neonicotinoids."

Neonicotinoid insecticides frequently become so concentrated that even small amounts landing on flowering plants around a field can kill bees and be transported to the hive in contaminated pollen.

Bees are far more than the subject of songs, the bane of outdoor picnics and the busy producers of the sweet stuff we all love, honey. While Einstein might have exaggerated some, he certainly was one of the first to issue the necessary clarion call. It is estimated that one-third of all the food we eat relies on bees for its production via pollination.

Over evolutionary timescales, other insects would probably fill this empty ecological void but in the short term man could expect the apple, orange, coffee, chocolate and rapeseed oil industries to collapse. This wouldn't be an extinction-level event for humans, but it would cause widespread economic hardship and possibly famine until alternative cultivation systems and crops could be developed.

Animator Steve Cutts' animated short, titled simply "MAN", while not focusing on bees specifically should give everyone pause as to how man is maintaining our planet and the repercussions incurred as we reap what we sow. Trust me, the 31/2 minutes you invest in this video, might be just the wake-up call the doctor ordered (for us and the bees)!