There's one hotel in the U.S. where the only place you won't find ducks is on their menu. The 144-year old Peabody Hotel in Memphis, TN is known for a tradition that has stood the test of time. Their famous ducks are today, national celebrities that have appeared over the years on The Tonight Show with Johnny Carson, Sesame Street, the Oprah Winfrey Show, in addition to People magazine and the Sports Illustrated Swimsuit Issue. 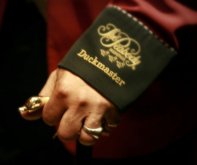 Duckmaster who is responsible for the care and well-being of said ducks, inclusive of feeding and training the the teams for the twice-daily marches in and out of the hotel lobby and water fountain.

In this vid, here's Duckmaster Jason Sensat describing what goes into making these ducks some of the luckiest in the world.

Coming in at a cool $200K in construction costs, a Royal Ducky Rooftop Palace was unveiled for these five lucky ducks. On December 3, 2008 in commemoration of the 75th anniversary of this tradition, the

management staff deemed it appropriate that their hard-working ducks should get the same 5-start treatment their guests have been receiving all those years.

Providing a residence as luxurious as the hotel, the Duck Palace is a 24 by 12 foot enclosure featuring granite flooring, ceiling fans, a scale replica of the hotel, a fountain decorated with a pair of bronze ducks, and a large viewing window for guests to see them romping around like Royals!

While Duckmaster Jason Sensat served only 4 1/2 years until August, 2011, there has only been 5 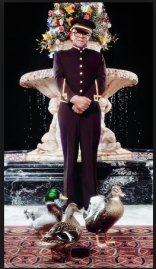 Edward PembrokeDuckmasters in total over the 7 decades. Former Ringling Bros. and Barnum & Bailey circus animal trainer named Edward Pembroke was the first serving in the role for 50 years until retiring in 1991.

Anthony PetrinaToday, those lucky are taking new marching orders from the 5th Duckmaster, Mr. Anthony Petrina who stepped into the role in 2011. When not tending to the five North American mallards, he acts as a public ambassador for the hotel, greeting guests in the Grand Lobby, doing media interviews, making community outreach appearances, and occasionally traveling with the ducks to promote Peabody Hotels. Doug Weatherford, Assistant Duckmaster tends to The Peabody’s flock on the Duckmaster’s days off and conducts history tours for hotel guests. 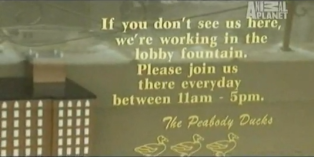 The tradition and routine is such that at 11 a.m. each morning, The Peabody Ducks march from their rooftop Duck Palace - along a red carpet to the tune of John Philip Sousa’s “King Cotton March” - to a marble fountain at the center of the hotel’s Grand Lobby. They splash and preen in the lobby until 5 p.m., when the procession reverses and the ducks retire for the evening to their luxurious rooftop palace.

Every 3 months a new group of ducks get to taste the lap of luxury as well, since five lucky ducks are known to rotate in and out. The “duckiest job in the world,” the role of Duckmaster is one of only three such quirky positions in existence. Today, the Peabody flag flies proudly in Orlando and Little Rock as well, with the March of The Peabody Ducks and the position of Duckmaster having been adopted at each property upon opening. Life's just ducky at the Peabody's! 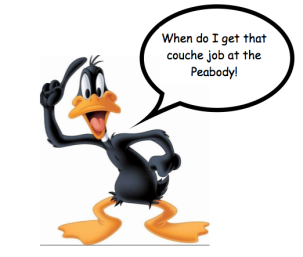