A lot of debris has made it across the Pacific Ocean since the tsunami
in Japan back in 2011. So when an 18-foot skiff washed up on a beach in
Washington State in late March there didn't seem to be anything
surprising about it -- until they took a look inside and found a
compartment with live fish swimming inside. 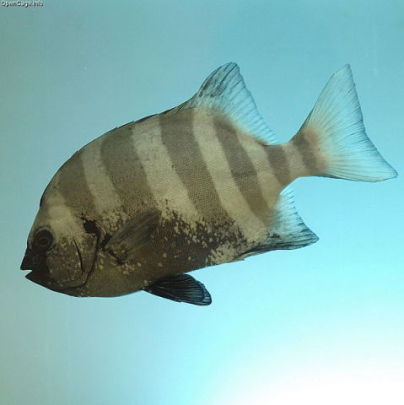 Striped Beakfish (Photo by opencage/Creative Commons via Wikimedia)Over the past couple of years some 1.5 million tons of debris have made the ocean voyage. While live crabs, sea stars, and algae had occasionally turned up clinging to the outside of the wreckage, but this was the first time live species arrived inside of the wreckage.

The striped beakfish, or barred parrotfish, were found in the bait box of the boat. They did not survive entirely inside the box, though. It is surmised that the skiff was partially submerged for much of the time as it travelled across the ocean and the fish swam in and out, using it as a safe harbor, and unknowingly travelling far from home.

Five of the six fish were immediately euthanized to guard against invasive species. The sixth fish is now living in the Seaside Aquarium in Seaside, Oregon. The striped beakfish is native to the waters off Japan, China, and Korea.

The question remains as to how many other fish, and possibly species, came along with the boat, but did not come ashore. Other creatures may have arrived on U.S. shores from the tsunami of which we are not yet aware.

Fish
News Stories
Weird, Odd or Bizarre
Wildlife
Christmas Is Here -- No Trout About It!
Something New For SNL? Snow Shark!
In Cod We Trust
5+ Cool, But Fishy, Aquariums
Comments