First Mammal To Go Extinct Is A Rat & No, It’s NOT Donald Trump! 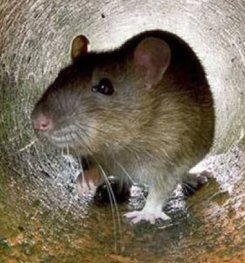 As much as naysayers would like to continue critiquing ‘climate change’ as a conspiracy theory, this week the world is witness to an unfortunate milestone. According to recent scientific studies, climate change has claimed its first victim in the mammal species. And no, this particular victim is not a political animal — as many might favor. This mammal is an “adorable rodent” according to The Guardian known as the the Bramble Cay melomys.

Sometimes referred to as a mosaic-tailed rat, this creature was named after Bramble Cay, a very small Australian island, which is the only known indigenous home for this species. This area is the

most environmentally degraded part of Moreton Bay. Just 340m long and 150m wide off the North Coast of Queensland, this mammal was considered the only one endemic to the Great Barrier Reef.

This location is also the first recorded extinction of a mammal anywhere in the world thought to be primarily due to human-caused climate change.

The primary reason for extinction can be directly associated with the rising level of the ocean, a devastating consequence of climate change. Bramble Cay island has flooded on a number of occasions when the sea was particularly high, thereby washing away the rodents’ homes and drowning many of them in the process.

“For low-lying islands like Bramble Cay, the destructive effects of extreme water levels resulting from severe meteorological events are compounded by the impacts from anthropogenic climate change-driven sea-level rise,” the researchers noted in their report.

Over the last two decades, high tides have put more and more of the island underwater. The coastal vegetation that the melomys called home has decreased by 97 percent.

To put this in perspective, some 40 percent of the world’s population lives within 62 miles (100 kilometers) of the ocean, putting millions of lives of both humans and animals at risk in years to come.

As a result, the Queensland government website now makes mention that recovery actions at this stage are futile. “Because the Bramble Cay melomys is now confirmed to have been lost from Bramble Cay, no recovery actions for this population can be implemented,” it says.

While scientists will no longer recommend actions for people to take in order to protect the melomys, there are still plenty of reasons to try to safeguard Bramble Cay from further effects of climate change.

Even though the region is relatively small, the island can be and should be guarded for other species. For instance, it is the most important breeding ground for green turtles and a number of seabirds in the Torres Strait, the researchers said, and has long been visited by its traditional custodians, the Darnley Islanders, who caught fish, turtles and birds.

Can we Stop the Seas from Rising? 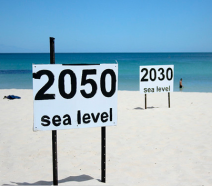 John White, an ecologist from Deakin University in Australia, who was not involved in the study, noted that this extinction is the tip of the iceberg. “I am of absolutely no doubt we will lose species due to the increasing pressures being exerted by climate change,” he said. “Species restricted to small, low lying islands, or those with very tight environmental requirements are likely to be the first to go.”

As it turns out, reducing our emissions would help slow sea levels from rising, but at this juncture, it is very unlikely we could stop further rises altogether. For example, if emissions go unchecked, we could experience the planet warming another 4°C by 2100, causing sea levels to rise between two and five feet.

On the other hand, is we were to get super-proactive at decreasing emissions, we could probably keep the temperature increase below 2°C.

However, even at those levels,

sea levels would still rise between 11 inches and 3.5 feet. That’s progress, but still won’t bring back the melomys . . . and as far as the political rat referenced above, one could only hope for his extinction, any time soon.