For fire fighter Cory Kalanick it was just another day on the job in
Fresno, California. With the rest of his team he responded to a home on
fire. Once the fire was beaten back, Kalanick was ordered to check the
home for anything salvageable. As he was walking through the remains of
the home something caught his eye as the 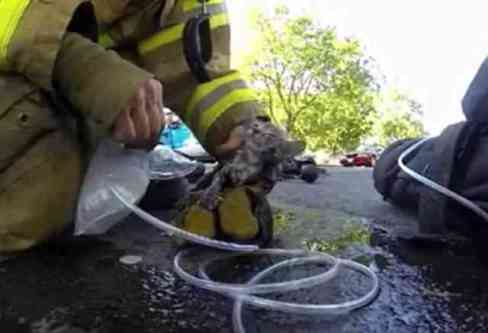 Fire Fighter Cory Kalanick Works To Save A Kitten's Life (You Tube Image)flashlight from his helmet
crossed the floor -- the tiny, limp form of a gray kitten. He picked up
the animal and took it outside.

He quickly set to work on saving the kitten's life -- giving it oxygen and pouring water over it. He had laid the kitten out on one of his thick gloves to protect the cat from the heat of the pavement. With water, an entire tank of oxygen, and some loving massage the kitten slowly returned to life. It was 15 minutes that seemed like an eternity.

The kitten, now named Lucky, had originally been found outside by the family that lived in the home. She had been abandoned in a shopping cart along with her brothers and sisters.There is no word on why the animal had been left in the house. 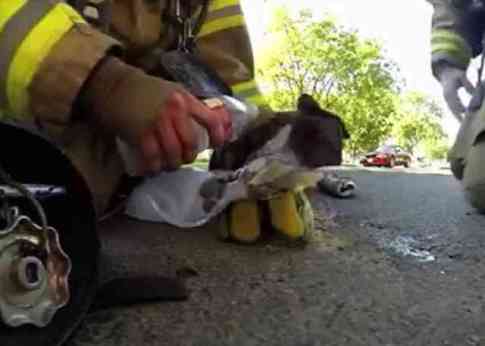 Fire Fighter Cory Kalanick Works To Save A Kitten's Life (You Tube Image)It has long been said that who you really are is what comes out in an emergency. Kalanick has often been teased by his fellow fire fighters for being an eco-friendly vegan. He certainly lived up to his ideals on this day.

A fun video that features the footage from Kalanick's helmet camera has been put together to look like it is a trailer for a real action movie. While it makes light of a serious situation, it also underlines the heroism of one fire fighter.

There are rumors that the kitten did die later on that night, but I have been unable to confirm this as fact. However, it is comforting to know that even the tiniest life is important to those we count on for rescue. Fire fighters are just "purrfect" to me.