New innovations in reindeer herding is not the sort of news that is
going to pop up every day. It is a millennia-old vocation throughout northern
Scandinavia and parts of Russia. The animals are bred and raised for
their meat, fur, 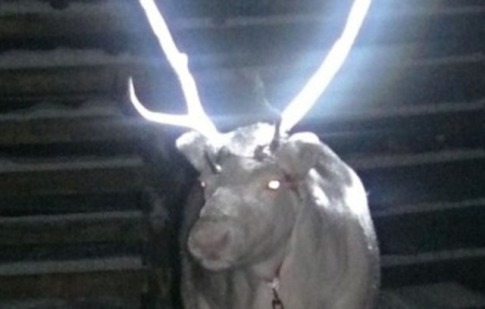 Glow-In-The-Dark Reindeer (You Tube Image)and milk. The problem is that thousands of the reindeer
are killed in car accidents every year -- and the answer just may be
glow-in-the-dark antlers.

Thankfully this is not some creepy gene-splicing experiment between reindeer and bioluminescent fish. Instead the antlers have been treated with a phosphorescent paint.

The herders in northern Finland are trying different types and colors of the paints that will alert drivers to the presence of the animals in the dark and be able to resist the harsh weather. They are also trying to determine which part of the reindeer to paint to make them visible. The other issue that they are concerned with is making sure that the paint does not have an adverse effect on the animals.

Other attempts have been made to make the deer more visible -- such as reflectors or reflective tape. The deer tend to rip those off. And speaking of rip-offs -- the signs posted along roads to warn drivers about the deer are often stolen by people as souvenirs of their travels.

If the paint job works then there will be thousands of reindeer wandering around Lapland glowing like they got too close to a nuclear reactor. The herders work with about 200,000 of them throughout the region.

Chances are that motorists in northern Finland have a positive take on the news since one run in with a deer can total your car. People all over the world have learned that one the hard way.

While there are those who believe that the antlers are the best part of the animal to paint, there is no word on how things will be handled when the reindeer shed their antlers.

Owl Trolls Photographer By Posing In Front Of Sign
Comments