Like To Feed The Animals? Now It'll Cost You

Feeding wild animals is never a good idea. Doing so can lead to
aggressive behavior, overpopulation, and the spread of disease. It has
become such an issue in the parks around Tacoma, Washington, that the
Metro Parks Tacoma is taking steps to deal with the problem -- feeding
human food to animals now carries a hefty 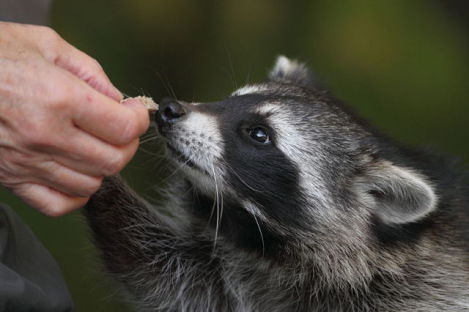 Feeding wildlife changes an animal's physical development and behavior. Park-goers and picnickers are being deluged by begging raccoons and squirrels, and getting over run by ducks and geese -- not to mention dealing with the natural aftermath from an over abundance of over-fed birds.

There are more reasons not to feed wildlife than having them become annoying. Animals that become dependent on a human food source are at risk when something disrupts that artificial flow. No longer accustomed to foraging for food they face starvation and death. Even when the supply is abundant, human food is not nutritionally complete for these animals and leads to a variety of health problems, including a higher susceptibility to disease.

A constant source of human food is likely to attract more animals to the area which can also lead to higher rates of disease. This is exacerbated by increased reproduction rates to add to the overpopulation. The environment becomes less able to sustain the animals.

The neighbors may put you on their hit list if they find out you've been feeding the wildlife as the animals can cause damage to property and structures. The animals will also start pestering the neighbors because they won't differentiate between you and the next guy.

While it may be enjoyable for humans to get up close and interact with animals, the animals lose their wariness of people, which can leave them vulnerable to those who may want to do them harm.  The animals can lose this wariness to the point of entering open doors to seek a quick snack.

If you do want to help the wildlife around you then you can help create natural habitat areas in your yard and install plants that are a natural food source. Then you can enjoy them from a distance and not cause them unintentional harm.

Later this month residents of Tacoma will be ticketed and fined if they are caught feeding wildlife. The fine is not just a slap on the wrist at $532. Officials are planning an aggressive educational campaign to go along with the new law, hoping to prevent the need to punish violators.

Was This Weasel On Back Of Woodpecker Photo-shopped?
Yaheetech 61-Inch Playtop: A Big, Fun, Highest Quality Cage For Small Birds
These Garden Planters Are For The Birds
Mailman Dealing With A Turkey Trot
Comments