The  New Jersey pine barrens are only about a two-hour drive south of New York City (and the first half hour is getting out of the City).  My recollection is that only Rhode Island and Delaware are smaller states than Jersey and that Jersey is the most densely populated (or was when I was in grade school) but the pine barrens are still one of the largest tracts of relatively unspoiled habitat on the east coast.  The barrens themselves are over a million acres and the National Pinelands Reserve is about 493,000 acres. Almost every place in Jersey south of a line running east-west  through its mid-section is (or was) barrens. The chief characteristic of the barrens is the sandy, acidic soil that is poor for growing crops such as corn or soybeans.  But the barrens harbor a distinct flora that thrives under these conditions and some of these naturally-occuring plants have been converted to crops such as cranberries and blueberries. Then, of course, there are the several species of pine that dominate the landscape and give the barrens their first name, along with a stunted-looking group of oak species.  Also here are stands of Atlantic White Cedar growing along creeks and rivers while the Red Cedars grow up in dry fields.  An understory of odd-looking plants with odder names such as Bearberry and Pyxie Moss grow along the trails and in open areas. 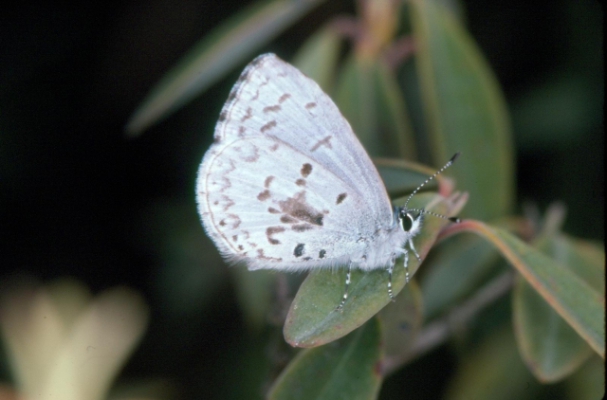 All of these plants have a distinct insect fauna asscociated with them including butterflies. So, Pitch Pine has the Pine Elfin, the several species of blueberry serve as hosts for Brown Elfin and Spring Azures, Cranberry is the host plant for Bog Copper, Atlantic White Cedars have Hessel's Hairstreaks perching on them and Red Cedars have Olive Juniper Hairstreaks in their place. Meanwhile,  the stunted-looking oaks host a suite of species including Oak Hairstreak, White-M Hairstreak, and several Duskywings. Bearberry has Hoary Elfins, the hollies have Henry's Elfin and Holly Blues, and that is to say nothing of the special grasses and sedges that grow in the barrens, that also have special butterflies that depend upon them.

I should say here that the butterflies that are most sought-after in the barrens are small with subtle colors and markings and not at all the Neotropical showboats that people of poor taste and limited imaginations think of when they envision rare butterflies. What places these butterflies high on so many butterfliers' want lists are their restricted habitats and their short flight period - - often the only chance to see some of them is during the first few weeks of spring and if you schedule a weekend for a trip and get rained out, you must wait another year for your chance.  And you are not going to see these butterflies in suburban yards no matter how many butterfly bushes you plant.  Georgia Satyr, Bog Copper, Dion Skipper and Two-spotted Skipper are only in sphagnum bogs with carnivorous plants and knee-deep muck. Most of the others rarely stray far from their special host plants. 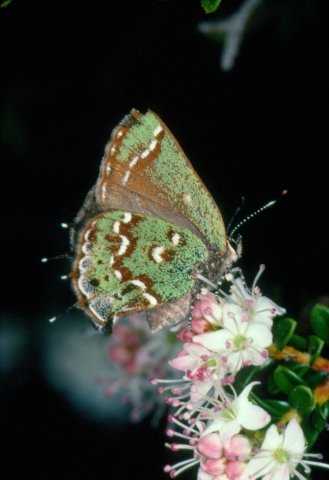 So the first weekend in May, if it is sunny, and if you know your way around, can reward you with Brown Elfin, Hoary Elfin, Pine Elfin, Henry's Elfin, Frosted Elfin, Olive Juniper Hairstreak, Hessel's Hairstreak, White-M Hairstreak, Falcate Orange-tip, Cobweb Skipper, and Sleepy Duskywing, and those are just my personal favorites. There are always other, more common, species mixed in so it would be typical to get between 20-30 species total.

A sunny day in May in the barrens is glorious, but some species only appear once it gets hot and sticky down there.  Mid-June through early July is the time for Banded Hairstreak, Oak Hairstreak, Striped Hairstreak, Coral Hairstreak, Bog Copper, Georgia Satyr, Two-spotted Skipper and Dion Skipper. The summer is also the best time for seeing the bigger butterflies such as Spicebush Swallowtail, Tiger Swallowtail, and Monarch, although these species are around in the spring as well. The colorful Red-spotted Purples fly from late May right through the fall.

The rest of the season, all the way through October, is the time to turn up butterflies of more southern affinities that make their way north most years. Chrome yellow Cloudless Sulphurs look lost flying above the parched late summer grasses and rarely seem to stop.  In August they are flying non-stop north and in September, non-stop south, but the whys and wherefores I doubt that anyone knows (which is my way of saying I don't know). Zipping around the fall flowers are Fiery Skippers, Sachems, Common Checkered Skippers, Variegated Fritillaries, Common Buckeyes, and Red-banded Hairstreaks. All of these southern species have become so common in recent years that they are derided as "trash butterflies" by those misguided enough to treasure only the rare in nature and overlook the beauty in the common. 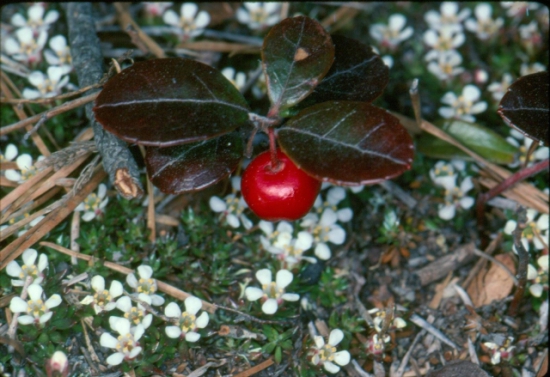 The barrens are not much of a tourist hot spot, but there are plenty of motels sprinkled throughout if you want to stay more than a day. Fine dining is more or less limited to Lucille's Diner in Warren Grove.  (You can read about it in Bob Pyle's "Mariposa Road.") Finally, be warned that in addition to butterfly diversity, the barrens rank high in tick, chigger, and biting flies diversity.  Take the usual precautions but know that none of them work.