Fauna in a Galaxy Far, Far Away: 10 Awesome Creatures from Star Wars

It's no secret that I am a Star Wars fanatic.  I have seen the movies
a million times, watch The Clone Wars religiously, collect (and read)
the comics, and have almost all of the novels.  Among my items I have
several R2-D2s, a stuffed Yoda (makes a great pillow), and God knows how
many action figures.  As I write this I am currently drinking coffee
out of a Boba Fett mug.

So to say that I am a fan is something of an understatement.

I got to thinking about how many non-sentient critters live in the Galaxy Far, Far Away... and this is just the tip of the iceberg.

Let me state that all of the "animals" presented here are (for the most part) considered non-sentient.  Wookiees, Ewoks, Hutts, and the like will not be covered as they are intelligent, sentient beings--though some are definitely smarter than others.

So here are my picks for 10 Amazing Creatures from Star Wars:

The workhorse of the Star Wars galaxy, the Bantha can be found on various planets including Tatooine and Kashyyyk (home of the Wookiees).  This beast is easy to domesticate and is most often associated as a mount for Tusken Raiders, a nomadic and somewhat hostile race of beings on the desert planet Tatooine.

How it was brought to life on film: Computer graphics were very crude in 1977 when the original Star Wars was released, the Banthas were actually realized by using live elephants in Bantha costumes.  I can't image how difficult handling those pachyderms would have been.  In later iterations of the film, Banthas were created using CG. 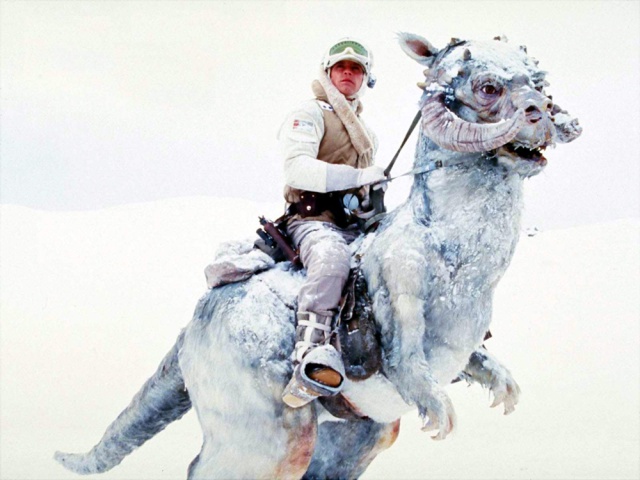 I want a Tauntaun.  But I don't want to live in a sub-zero climate.  These omnivorous reptile/mammals exist on the ice planet of Hoth and, though they are ideally designed for the climate, they still had to seek shelter at night as the planet's temperature would fall so drastically that it could kill them.  The Rebel Alliance was able to train Tauntauns as mounts by taming the alpha female of a pack; this made the training of the remaining creatures much easier.

How it was brought to life on film: The Tauntaun was created by utilizing a combination of stop-motion-animation and large-scale puppets. 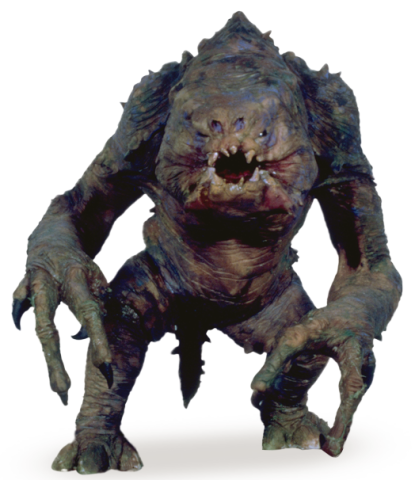 Rancors are just plain scary.  Native to the planet Dathomir, these carnivorous, warm-blooded repto-mammals stand between 5 to 10 meters in height.  I would not want to run into one of these at night (though I have in a few Star Wars video games).

These monstrosities are used by the Witches of Dathomir as mounts.  Though not thoroughly sentient, some Rancors have actually been taught advanced skills such as reading and writing.

How it was brought to life on film:  The Rancor in Return of the Jedi was actually a puppet manipulated with numerous rods.  When shot in slow motion, it looked as though it was huge, when in fact it was only around 1-inches tall. 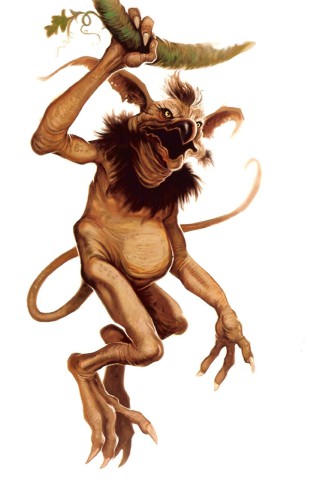 Though partially sentient, I include Kowakian Monkey-Lizards in this list because they are... well, sort of insane.  Known for its malicious pranks and evil laughter (at inappropriate times), these critters are nothing but trouble.  Essentially they are scavengers.  When caught they are kept as pets by less savory individuals such as Jabba the Hutt and Hondo Ohnaka.  In Jabba's case, the Kowakian Monkey-Lizard named Salacious Crumb was caught stealing--and allowed to live only if he made Jabba laugh once each day.

How it was brought to life on film: In the simplest manner possible--a puppet. 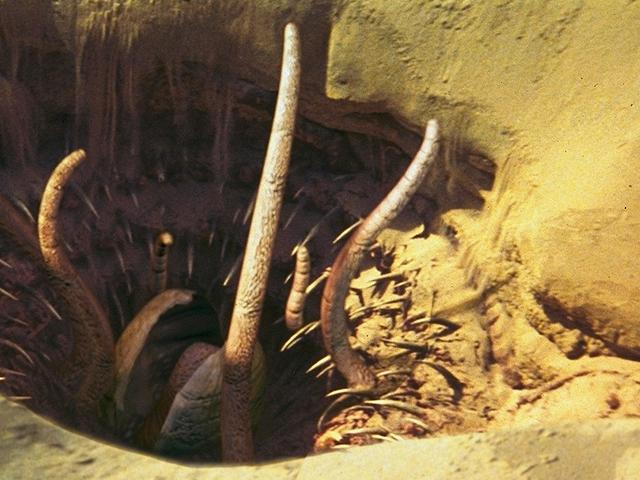 This semi-sentient creature lives for thousands of years and propagates throughout the galaxy as a spore.  It can be found on many planets, but the most famous would be found at the Great Pit of Carkoon, where Jabba the Hutt throws his victims into it's mouth in order to be digested over a thousand years.

That would be unpleasant.  What makes it more unpleasant is that the Sarlacc develops a symbiotic relationship with its victims as it eats them.  In other words, it talks to you as it digests you.  Ewww.

How it was brought to life on film: In the original version of Return of the Jedi, the Sarlacc was just a hole with some teeth around it and some air-powered flopping tentacles.  When re-released, it was revised and included a long neck and a beak-like mouth.  This was accomplished via computer graphics. 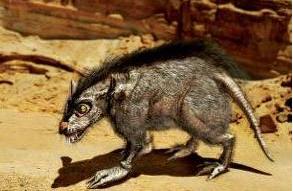 If you think you have rat problems, just take a look at that critter.  Standing at up to 3 meters at the shoulder, a Womp Rat is rat-zilla.  Considered nothing more than a pest on Tatooine (which shows you how tough the people from that planet really are), the Womp Rat is vicious, eats carrion, and travels in packs.

How it was brought to life on film: We never actually see a Womp Rat in the movies, though they do appear in the comics--and they're scary.  The only reference we get in the films is from Luke Skywalker, who states, "I used to bull's-eye womp rats in my T-16 back home. They're not much bigger than two meters." 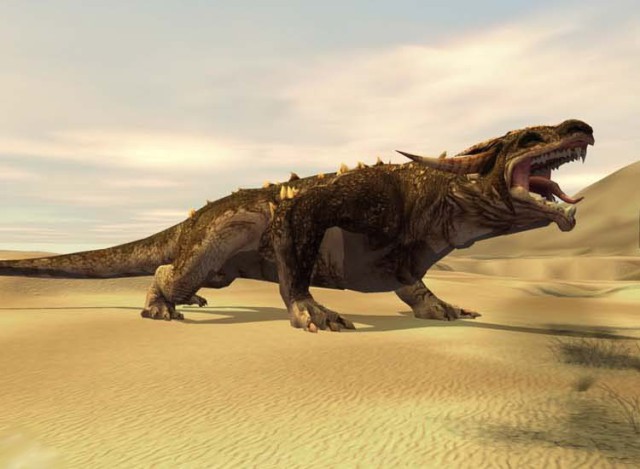 Surely the alpha predator on Tatooine, the Krayt Dragon grows up to 45 meters long.  That's big enough to make me run away if I saw one.  This doesn't keep hunters away from them, however.  Krayt Dragons ingest rocks to aid in digestion.  These rocks become polished orbs known as "pearls" and are extremely valuable.

How it was brought to life on film: This is another creature that we never actually see in the films--though they do appear in many of the Star Wars games.  The image above is from the much maligned Star Wars Galaxies MMO (a game that, for all of its problems, I miss quite a bit).

The only indications of Krayt Dragons in the films involve a large skeleton half buried in the Tatooine sands and Obi-Wan's imitation of a hunting cry utilized to scare Tuskan Raiders away from an injured Luke Skywalker. 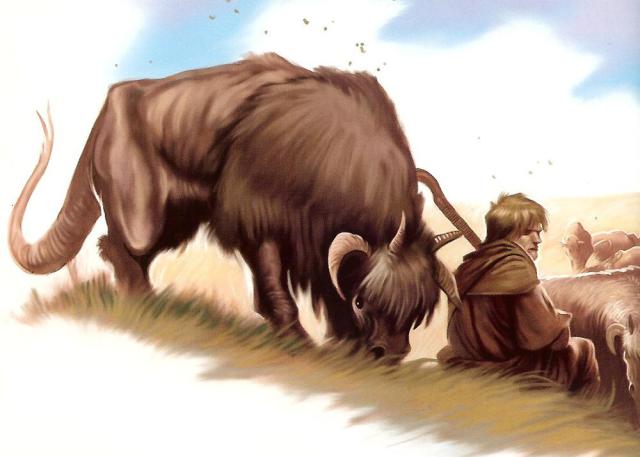 Nope, not the line of toys.  In Star Wars, a Nerf is sort'a like a cow... with acidic saliva.  Nerf meat is considered a delicacy and sells for a high price at restaurants in the Core Worlds.

How it was brought to life on film: In this case we have only a verbal reference between Han Solo and Princess Leia: 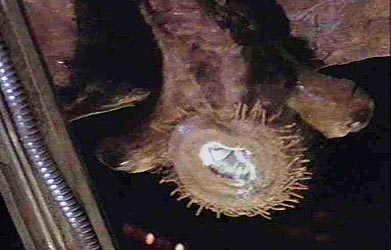 Silicon based parasites, the Mynocks are the bane of any starship captain.  They live off of electrical energy from various sources--including the power cables of starships.  They are generally found in the vacuum of space and have an allergic reaction to certain atmospheres that makes them explode.

How it was brought to life on film: Puppets, my friends.  Puppets. 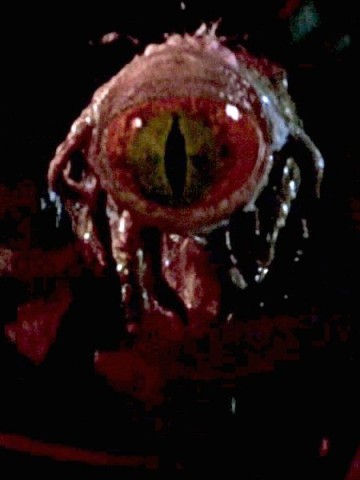 Possibly the most memorable creature from the Star Wars movies, the Dianoga was long known to fans as "The Trash Monster."  While we only catch a glimpse of its head, what lies beneath is the scary part.  This thing is essentially a giant omnivorous octopus with a large mouth and the ability to turn transparent and blend in with its surroundings.  Dianoga are generally considered a threat, as they grow to 10 meters in length and are quite hostile.  What scares me more are the smaller versions of this creature: they crawl up thin sewer lines and out of toilets.

How it was brought to life on film:  I think it was a combination of giant rubber tentacle and stop motion animation (or high speed photography of a puppet for the head).

If you want to learn more about these cool imaginary creatures, The Wildlife of Star Wars by Terryl Whitlatch is a really great book: 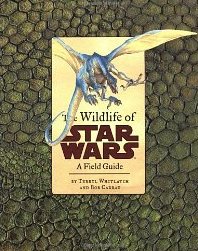 There are tons of creatures in the Star Wars universe.  Which one is your favorite?  Let us know!

READ ALSO: Top 10 Coolest Mythical Animals in Movies and Television or check out my picks for fun animal videos.

Celebrity Pets
Design
Fun
Fun Stories
Top Ten
Could 'Be Kind to Animals Or I'll Kill You' Ever Be A Fashion Statement?
"And The 'Pawscar' Goes To" At American Humane Assn's Oscars®