Neighbors were concerned earlier this month when five exotic animals were returned to their home on a 70-acre farm near Zaneswille, Ohio -- but it may not be for long. The two leopards, two monkeys, and a bear were survivors of tragedy when local authorities there were forced to kill nearly 50 animals that had been released from their cages on the farm by their owner, Terry Thompson, who then took his own life. 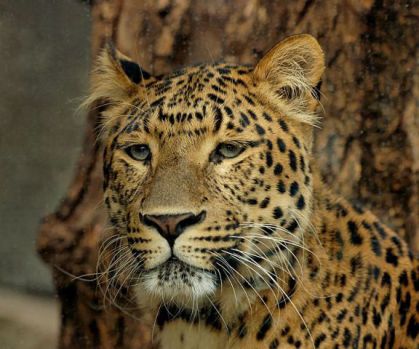 The state of Ohio has some of the nation's weakest laws governing exotic animals. While lawmakers have felt pressure to reexamine the laws, nothing under current Ohio law allows state officials to check on the welfare of the animals or require that they be kept in more livable conditions. New legislation is in the works that would ban ownership of dangerous animals, but existing owners of such animals would be grandfathered and exempt from the law.

While the animals may be "home," their fate is still up in the air. It turns out that Marian Thompson owes more than $14,000 in back taxes on the farm. Mrs. Thompson was sent a letter in November concerning her tax debt but never responded. Prosecutors had hoped to resolve the issue before having to resort to foreclosure on the property. However, they filed for foreclosure last Wednesday. It is currently unknown what will happen to the animals if Mrs. Thompson loses the farm.

It does beg the question: If Mrs. Thompson cannot pay her property taxes, can she really afford the cost of caring for a number of exotic animals in a safe and humane manner?

Face Winter With Wolves And Hawks

Cat Meets Deer -- The Animal Video of the Day!!!

Thumper-- and We're Not Talkin' About the Rabbit From Bambi...
Comments