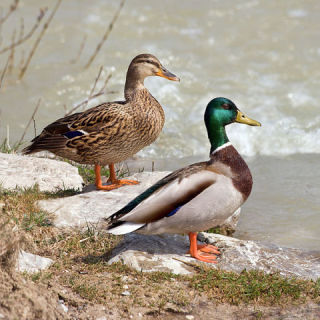 Female (left) and male mallards: image via wikipedia.org Wild ducks, or Mallards, are native to most of the world, the females recognizable by their streaked brown plumes, and the males, or drakes, most recognizable by their luminescent green necks and heads.  Drakes are pretty randy birds, their sexual behavior bordering on rape, but should a drake become obnoxious, female mallards have a secret method of birth control.

Female mallards are very particular about who fathers their chicks. During mating season, they will accept advances only from mallards with the brightest green feathers on their heads; these are, in fact, the healthiest drakes.  Recently, researchers have also found that the color of a drake's bill carries information about his sexual heath; that the brighter yellow color indicates that the drake has superior semen - of the bacteria-fighting kind.

This information protects the female from acquiring an STD, or sexually transmitted disease, harmful to her and her chicks... if she manages to couple with a bright-billed mate.  But what if she doesn't find such a mate? 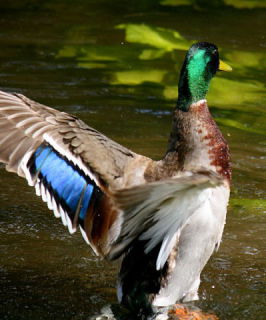 Mallard drake: image via wikipedia.orgAfter mating season, drakes remain potent and sexually active. While their 'wives' are off caring for their chicks, males will chase 'single' females, quite persistently.  The females are often unable to fight off the drakes successfully and eventually succumb... but they can fool the male.

You see, the female mallard's genital anatomy is like a labyrinth, providing many routes the male genitals can take. Most of them, unbeknownst to the male, are 'dead ends.'  There is only one path that leads to the uterus, and the female is able contract the muscles at that entrance, closing it off, so the male cannot penetrate it.

No pills birth control, anatomically provided for the female mallard.

That's the quack for today!