Snowflake, the only albino gorilla ever known to exist, likely received his signature snowy coat and pink bubblegum-colored skin due to inbreeding. 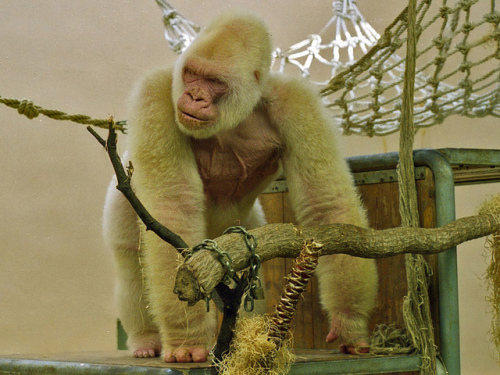 Snowflake as seen in his enclosure at the Barcelona Zoo.: (Photo by Ettore Balocchi/Creative Commons via Flickr)

The adorable Western lowland gorilla was a star attraction at Spain’s Barcelona Zoo since the mid 1960’s, after he was found at approximately two years of age in the jungles of Equatorial Guinea. Snowflake lived a long, healthy life and fathered many children until he had succumbed to skin cancer, most likely a direct result from his albinism, in 2003.

Since the gorilla genome has been sequenced, scientists have taken a sample of Snowflake’s frozen blood to discover exactly why Snowflake lacked the signature jet black skin and fur of the average gorilla. Upon further study, researchers found out that Snowflake’s parents were probably related via uncle and niece, noting each parent shared about 12% of the same DNA. This is the first time that gorillas have ever been noted to interbreed among family groups. Some scientists are worried that the destruction of African rainforests could result in more inbreeding due to a lack of space for individuals to break away from the troop and start their own family groups. 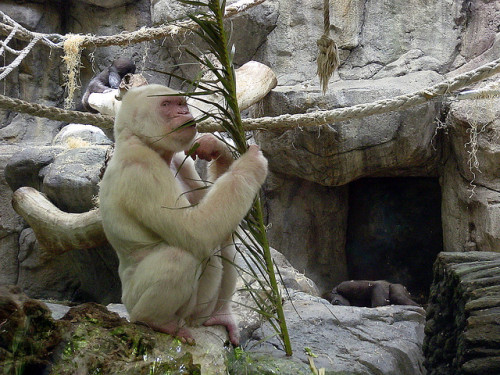 The gene “SLC45A2” was inherited from both of Snowflake’s parents and had directly resulted in his albinism.

Albinism is a genetic birth defect that affects animals and humans which results in a lack of skin, eye and hair pigmentation. This lack of melanin places albinos at a greater risk of receiving sunburns and skin cancer from exposure to sunlight.  Many different animal species have been noted to include individuals with albinism ranging from raccoons and hedgehogs, to cobras and peacocks.