People who want to be able to take their pets wherever they go are
turning to the purchase of fake service dog vests. Disability rights
groups are claiming fraud is being perpetrated by the companies who sell the vests to just anybody. The companies do not require proof that
the person making the order has a real service dog. 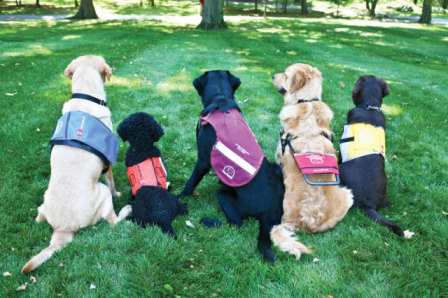 This trend is disturbing to people with legitimate disabilities with animals that are specifically trained to be service dogs. They say that the people selling and buying the vests are making a mockery of the Americans with Disabilities Act (ADA).

Dogs that have been officially trained to be qualified as service dogs are very well behaved and will respond easily to voice commands or hand signals. They have been trained to do specific tasks to aid their human with things that the humans are not able to do for themselves. The disabled person is also trained to work with the animal and is required to have a working knowledge of their local laws regarding access.

Most legitimate service dogs are issued vests, patches, and identification from the organization that trained them.  Other organizations sell the vests but require proof. The problem lies in the vendors who sell them and do not require proof.

The ADA does have some ambiguity on the certification of service animals and some service animal groups have been calling for the industry to be regulated. In the meantime, people with legitimate service animals feel that they are being viewed with increased suspicion.

It is important to remember that service animals are working animals, not pets. The service that the dog has been trained to do must be directly related to the disability of the person. Dogs whose function is to provide emotional comfort and support are NOT service animals under the ADA.

State and local laws may define service animal more broadly than
the ADA. For information about such laws, check with your state attorney's office.