Since the world-famous novelist Dan Brown is well known for blending fact and fiction, readers are always on guard in trying to separate reality from poetic license. For example, in his latest thriller The Lost Symbol, one of his main characters is introduced as the Secretary of the Smithsonian Institution. And while a quick Google search will assure readers that Mr. Peter Solomon never held that post, if one was to dial the phone number listed in the novel, they would be directed to a hauntingly realistic voice-mail greeting that states: "Hello, you've reached Peter Solomon…"

Smithsonian CastleSo, it's no wonder that when Brown relates the story of founder James Smithson and the museum's early history, that one might wonder if the author is once again blurring the boundary lines between fact and fiction. Of note was his reference to the Smithsonian Castle, home to the Institution's first Secretary, Joseph Henry and his family from 1855 to 1878.

However of greater interest were the residents that succeeded the Henrys, some hundred year later… namely, barn owls with the unusual names of "Increase" and "Diffusion."  While Brown notes them in passing, it was curious to me how barn owls could have been allowed to take up housekeeping in one of the country's leading museums.

In fact-checking the Smithsonianmag.com, however, indeed this pair of barn owls were part and parcel of the museum's celebrated history. Under the administration of Secretary S. Dillon Ripley (1964-84), a pair of trained owls from the National Zoological Park were commissioned to not only take up residence in the Castle's northwest tower but were specifically singled out to limit the entry of other residents, the unwelcome and growing rat population. 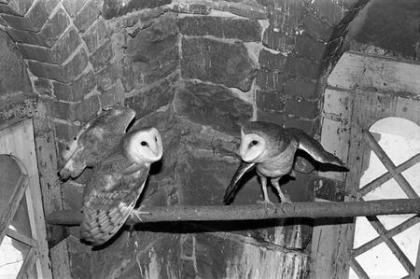 "Increase" & "Diffusion" in the Smithsonian Castle Tower
Ripley aptly named these in-house predators "Increase" and "Diffusion" to underscore the Smithsonian's mission statement: "for the increase and diffusion of knowledge."  The duo were given the keys to the Castle January, 1977,

and hatched three young owlets that spring. There, their tenure lasted fifteeen years or so. However, when given their first chance to see the world outside the tower doors, or perhaps when their repetitive diet of "rats du jour" got to be too mundane, they literally "flew the coop" - never to be seen again.

Today the towers are uninhabited. And although Ripley was saddened by the loss of his feathered friends, those who had tended to them over the years were probably not. Writing in 1993, one such caretaker chronicles his daily ladder climb to place bags of dead rodents in the coop, while dressed in a protective suit and helmet to guard against droppings. Ripley himself once received an aerial attack when he poked his head in to take a look at the birds and was hit squarely in the eye by one sizeable owlish deposit. Yep, that's true as well. . . believe it or not! 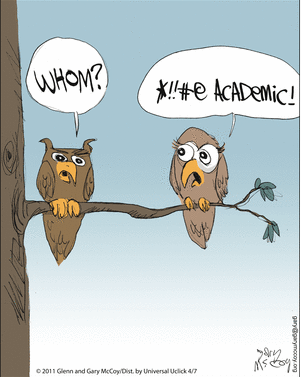 He must have been educated at the Smithsonian!

Fun
Fun Stories
History
News Stories
Owl
Rodents
The "I Don't Want This in my House!" Animal Video of the Day!!!