Rusty the red panda made a daring escape from this spacious enclosure on June 21st, and no one knows exactly how the adorable little fur ball got out in the first place.

The nearly one-year-old red panda was born in Nebraska’s Lincoln Children’s Zoo and had been paired with a mate named Shama in early June. 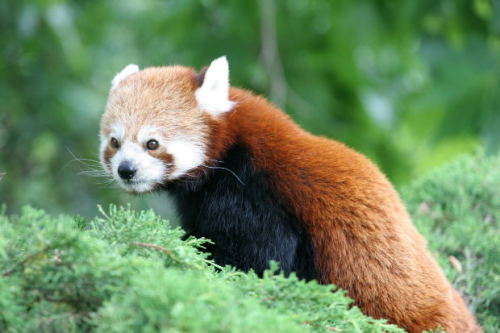 Washington Zoo staff estimate that Rusty got out of his enclosure by climbing out via the overgrown canopy of tree limbs and bamboo planted in his Washington home. The prevailing theory is that the recent heavy downpours caused many of the tall bamboo stalks to bend over some of the enclosure’s barriers, thus creating bridges for Rusty to easily climb over. The zoo’s staff is combing over security footage and trimming back the foliage in and around Rusty’s home to prevent this from ever happening again.

Thankfully, Rusty was discovered in a nearby neighborhood only a few hours after the zoo realized that he went missing. Rusty’s keepers were dispatched to his location and had easily managed to calm him, capture him in a net and move him into a kennel for safe travel back to the zoo.

Don’t worry about Rusty, he’s currently in quarantine, but he’s eating and drinking as a healthy red panda should. He’s scheduled to go back into his newly landscaped bamboo home as early as next week. It’s a happy ending for everyone!

Red pandas are reddish colored, house cat sized animals that resemble raccoons. These bamboo munching mammals can be found throughout central China, the mountains of Nepal and Myanmar. They are arboreal creatures that spend most of their lives foraging, sleeping and exploring forest treetops.