If you've ever been a cat owner, you know that felines abhor all things associated with H20. Differing from dogs, it appears their DNA gave them the gene that says cats don't mix with water. However, with
seventy-five percent of the planet covered with water, it appears
certain habitats would require some cats to acquire aquatic skills to include --
of all things -- the doggie-paddle!

In an evolutionary anomaly, the 'Swimming Lions' of Botswana have done just that. While fish, crocodiles, hippos and antelope co-exist in the region's Okavango Delta -- the ruler of that kingdom is definitively, the lion. And proving that nurture can sometimes overrule nature, those unique lions have become supreme swimmers to boot.

That's right -- this proud pride of lions, out of necessity, have learned to lead a semi-aquatic life during the wet season, as they travel from island to island carrying out their daily routines. Botswana's Okavango Delta is a unique natural resource and one of the largest deltas in the world where these swimming lions not only like a soothing dip, but have also taken to water to seek out their prey.

They hunt during the day under the baking African sun, swimming through deep rivers to seek out the indigenous Cape buffalo. Their water-based exercize combined with a diet of protein-rich buffalo meat 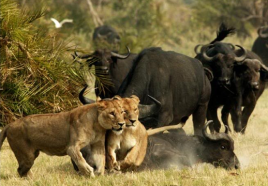 has led to the development of huge muscles, and these super-cats now dwarf other lions in comparison.

So how has this new strain of lion developed? To answer this question, the

One particular pride called the Pantry are described as 'risk-takers', using smash-and-grab tactics to kill mature buffalo. "It's fascinating to watch," says Joubert. "Members of this pride will rush straight into the buffalo, confronting the bigger bulls."

"This is not easy prey; buffalo kill more people in Africa than lions. These enormous male buffalo targeted by the Pantry pride are bad-tempered and aggressive guys. Their slashing horns and razor-sharp hooves can be the death of a lion ? it's a battle of titans" adds Joubert.

On Tuesday, June 17 from 8-9 PM, MUTUAL OF OMAHA'S WILD KINGDOM: SWIMMING LIONS will

Christiaan & Hanlie WinterbachThe special introduces another husband and wife team -- the wildlife biologists Christiaan and Hanlie Winterbach who follow their quest to understand this unusual lion behavior.  The documentary will highlight Sadu, a lion who has successfully adapted to her unique environment and is shown passing her aquatic skills on to her eager cubs -- who may hold the key to the survival of the species.

The delta's population of about 1,500 lions makes it the third largest in the world. Quite a large number of cats who know how to swim, wouldn't you say? Perhaps some day, they can be recruited as swim coaches for all those scaredy cats still afraid to tip their toes in the water! 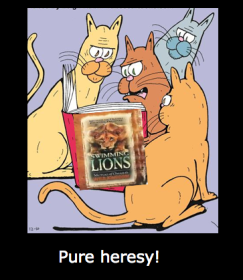