Evolution Speeding Up From The Days Of Land-Dwelling Whales 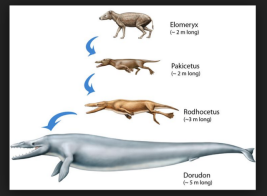 As many of us learned in our high school biology classes of yesteryear, the evolution of animals can take thousands of years, or more. Yes, you might say it moves at a snail's pace. The process is of course different for each species as the speed differs from organism to organism.
For instance, paleontologists researching fossil records have determined that it took a million years for whales to evolve from their land-dwelling mammalian ancestors.

So is there any conflicting evidence to indicate that we can see evolutionary changes in animals within our lifetimes?

Well, for starters this holds true for infectious agents, such as bacteria and parasite. They can evolve extremely quicker than others due to man's intervention and the drugs we manufacture to fight against them.

Beyond this lower end of the food chain, there is also evidence  that larger organisms, such as vertebrates, or back-boned animals are a’ changing. 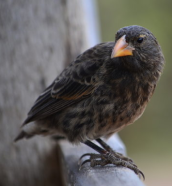 Galapagos FinchOne of the most enlightening examples of this is evident with a population of finches living on Daphne Major island in the Galapagos Archipelago. Research shows that ground finches Geospiza fortis evolved larger beaks after a major drought in 1977. During this harsh period, the small seeds on which the ground finches were feeding on became scarcer, and most of the birds died.

The research also uncovered that the mortality rate was lower among larger birds, with a larger beak. They were able to crush bigger and harder seeds, while the small seeds were depleted. Large-beaked finches had a great advantage over their small-beaked relatives to survive these tough conditions. Consequently, the reproduced more and transmitted this trait to their offspring. Following the drought, scientists observed a shift towards larger beaks and body size among subsequent generations.

The fact that evolution can be this rapid not only allows scientists to observe it, while it’s happening, it also means that they can perform real-time experiments in the field to test their hypotheses by changing specific environmental parameters.

Anatole LizardRecently, a Floridian team of scientists showed that a sped-up evolution of a species can be triggered by a negative interaction with a competitor. In this experiment, the researchers introduced an invasive species of anole lizard to a group of small islands that shared the same lifestyle and diet as the native one, Anolis carolinensis.

The invader anoles forced their native counterparts to move from their original habitat on the forest floor onto higher ground, into the trees. Scientists were not only able to document the rapid shift in the lifestyle of the native anole species (they perch higher and higher in the trees over time), but they also observed their body shape changing. Within only 15 years (20 generations), the native anole species evolved larger toe pads with stickier scales, enabling them to climb more efficiently in their new, higher habitat. 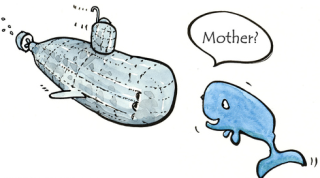 Wisdom, The Albatross, Lays An Egg At The Age Of 68