While many of us might dismiss yet another ‘cute’ dog photo going viral online, there was one this past week that 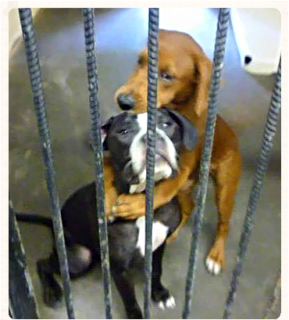 was just so heartbreaking, it actually saved the lives of a couple of pups who from all appearances resisted being separated. For those who don’t know what a ‘high kill’ shelter entails, it sets a time limit on just how long rescue animals can be housed before they are euthanized.

The dog duo of Kala and Keira were photographed hugging each other in an unnamed Atlanta, GA shelter, as if they had a premonition to what was going to happen to them next. In the photo, Kala’s paws are in a tight embrace around Keira’s neck, while both of their demeanor's appear more than worrisome. The image of Kala, an eight-month old hound mix and Keira, a one-year-old boxer mix was taken on July 20, just hours before being rescued.

An Atlanta-based dog rescue charity ‘Angels Among Us Pet Rescue’ posted that photo to their Facebook page with a plea for help that read: “I’m Kala. This is Keira. We’re so scared in here. The people working in the shelters see how scared we are but just told each other that today is our deadline.”

Kala's plea concluded with: “If no one saves us, someone will take her away from me. I’ll see her as she goes down the hallway -- she won’t come back and I’ll cry. They’ll come for me next and I won’t be as brave.”

Within less than three hours of that posting the dogs had offers of homes. Here, a happier photo of Kala and 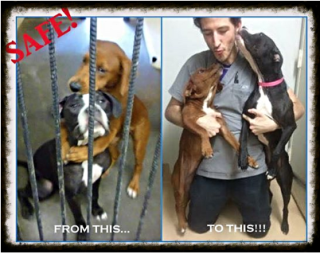 Keira is now making its rounds on social media. All toll, this social media awareness campaign helped to raise $3,400 to assist with the medical expenses for both dogs, and a donation to the charity.

“It seems they love to play together,” said Karin Wallace, a founding core member with Angels Among Us Pet Rescue where the dogs will be fostered. “The need to rescue pets from high kill shelters in Georgia is astronomical. Our ability to save more lives is limited only in our ability to find foster homes to care for them.”

The non-profit organization has helped more than 8,800 animals in Georgia avoid euthanization by rescuing them from kill shelters. AAU has more than 800 animals in the system, the increasing amount aligning with their motto, "Rescue One Until There Are None."

If this story has inspired you to consider adopting a shelter dog, according to the AAU, here are three easy steps to 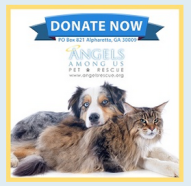 1. Fill out an application
2. Home check: The department of agriculture requires AAU to do a home check on all fosters every six months
3. Pay the adoption fee: The fee is roughly $280, which covers shots, microchip, spay or neuter and vet records

You can also consider donating to AAU to help both rescue dogs and cats here.