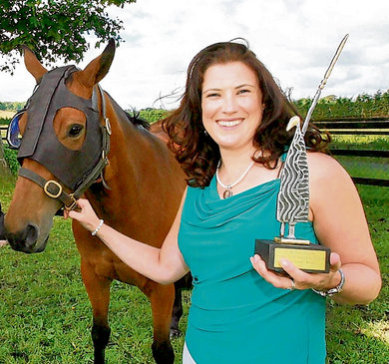 Dr. Barbara Murphy demonstrates new invention, the Equilume: image via irishtimes.comAn equine scientist, Dr. Barbara Murphy of the University
College Dublin, has invented an ingenious device to regulate a mare's breeding
cycle - and it's safer than birth control. The Equilume, a light-controlling
face mask, won Dr. Murphy the 2012 Enterprise Ireland One To Watch Award, and
here's why....

The thoroughbred industry, as you may know, has
classifications for horses that are hundreds of years old. One of the
classifications refers to the age of a horse and defines acceptable activities
for that horse. A 'yearling' defines a horse between one and two years old;
however, horses born in the second half of one year are considered yearlings on
January 1 of the next year, even though they are not between one and two years
old, and not physically ready to participate in equivalent
activities.

Perhaps the industry would consider counting months since
birth, instead of just years... but, instead, breeders have been putting mares
'under the lights' in their barns to try to control their mating periods.

Exposing mares to more light at night postpones the activity of the hormone
melatonin, so the horses have 'longer days.' As melatonin influences other
hormones that ready the mare for mating, those won't be stimulated either until
the 'days' get shorter. The objective of these activities is for newborn
thoroughbreds to be born as close to January 1 as possible.

The Equilume light mask eliminates the need for overhead
lighting to control a mare's birthing cycle, but it also can be used to reduce
gestation periods in mares (the average gestation is around 11 months), treat
jet lag in horses, and encourage hair shedding earlier in preparation for show
circuits. It does all this by providing a low level of light into one
eye.