Englishman Must Be A Fox Whisperer

When Mike Trowler of Kent, England, first met Cropper the fox had been
in a tangle with a dog and had not been the winner. Cropper had been
rescued by The Fox Project in Turnbridge Wells. Not only was he badly 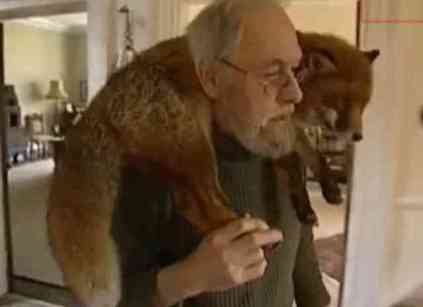 Mike Trowler and Cropper at Home (You Tube Photo)injured, he was also suffering from toxoplasmosis, a dangerous parasitic
infection. He was in no shape to be returned to the wild. There were
only two choices -- have him put down or find him a home. That is where
Mike came in.

Mike, a retired engineer, has been described as a man on a mission. He is fascinated by fox behavior and spends a great deal of time with them. In addition to nursing injured foxes back to health, he also takes in orphaned fox cubs and raises them until they can be released back into the wild. He does this by releasing them into his nine acre garden. A few remain to be fed each night, some stay in the area for several years, while others take off to establish their own territories further afield.

With Cropper life was a different matter altogether. Cropper became a member of the family. He would nip food from the dog's dish and curl up with the cats, but most of all he would hang out with Mike. The two would even go for walks together as though Cropper was a dog. Mike would roll him over and give him belly rubs. It was a situation that was fine with Cropper.

Sadly, after several happy years with Mike, Cropper passed away in 2007, even though his amazing story continues to make the rounds of social media on the internet. Mike is not alone though. Another fox, Jack, who had been suffering similar ailments, has moved in to hearth and heart in the Trowler home.  Jack enjoys a good game of soccer with Mike. They sit and watch TV together. Jack even reluctantly tolerates a bath in the sink just for Mike.

If anyone could be called a fox whisperer it would be Mike Trowler. In addition to the foxes, he has made friends with a couple of badgers who show up for dinner. One of the badgers, a female he named Benji, will eat from a bowl while he holds it and allow him to pet her.

While this may look like a lot of fun, it is not a vocation for everyone. It takes a great deal of patience and understanding, and a strong awareness of fox behavior. Mike also warns that having a fox about the house can be a smelly business if there is an accident. Fox urine is especially odorous and trying to use water to clean it moves it into the area of stench.

The Fox Project is a Wildlife Information Bureau and Fox
Deterrence Consultancy that was established in 1991, they added a Wildlife Hospital in
1993. They admit and treat around 700 foxes and 250 cubs annually.