Just a few decades ago scientists had believed that the black-footed
ferret was extinct. Then in 1981 a farmer's dog caught and killed one.
With the realization that the animal was not completely gone, it brought
about a rare opportunity -- that of bringing a species back from the
brink of extinction. 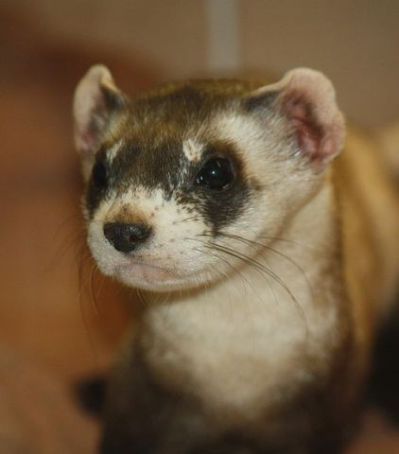 (Photo by Ltshears/Creative Commons via Wikimedia)

A captive breeding program was then started at the Cheyenne Mountain Zoo in Colorado Springs, Colorado, with just 18 of the furry critters. All of the ferrets alive today are descended from these 18 ferrets. Due to the small gene pool and the inbreeding, the ferrets have seriously compromised immune systems and are prone to infection and disease.

Their fate is also closely tied to that of their favorite prey -- the prairie dog. Farming, poisoning, plague and human encroachment on habitat have nearly wiped them out as well.  This is what caused the near-extinction of the black-footed ferret in the first place.

When the ferret kits reach the age of three months it is time to move on. The go to a sort of ferret "boot camp" at the National Black-Footed Ferret Conservation Center in Wellington, Colorado. They will start learning how to hunt and kill live prairie dogs by practicing on hamsters. They do get quite a bit of criticism for feeding them hamsters, but the ferrets are carnivores and the mission it to return these animals to the wild. They could hardly learn on sunflower seeds.

Graduation comes with the ultimate trip -- the one to South Dakota and freedom in Badlands National Park. They are release directly into a prairie dog colony. From there nature takes its course.

The program has been successful. While the black-footed ferret is still endangered, there are now 1,000 ferrets where there were once 18.  The non-profit group Prairie Wildlife Research tracks and monitors the ferrets in the wild. They will capture, examine, and vaccinate the animals before releasing them once again. It is hoped that the ferrets will one day put the captive breeding program out of business.

Orca Stories -- The Incredible Animal Video of the Day!!!
Nighttime Attack Of The Cannibal Lobsters
Comments