Emoji: Using Images Of Cats And Dogs Can Help You Find Your Next Pet Pet Adoptions Using Dog & Cat Emojis Through Emmett: Find your next pet at a nearby animal shelter using Emmett

Emoji images seem to have captured the hearts and imaginations of texters around the world. The silly little icons that have become so insanely popular are used to convey all sorts of thoughts and emotions in lieu of facial expressions when you’re unable to communicate face to face. From love and happiness, to sadness, sympathy, anger and just plain goofiness, you can get your point across with an emoji. Now, you can use the trend to find your next pet through a product or service known as Emmett. Emmett is an emoji-powered personal assistant designed to find homes for shelter animals right from your mobile device.

Created by a company doing business as Dynamic Vision out of Oceanside, Calif., Emmett is being called “the wave of the future” by product manager Ryan Greenwald. Here’s how it works:  Families and individuals looking for an adoptable pet merely need to grab their smartphone and text a dog or cat emoji (depending on which animal they’re interested in) to the telephone number (760) 201-1441. Within a matter of seconds, users receive a photograph and description of an animal that’s available from a nearby shelter. It’s that easy. No fuss, no muss, just a happy little critter’s face waiting for someone to rescue them and ultimately love them. 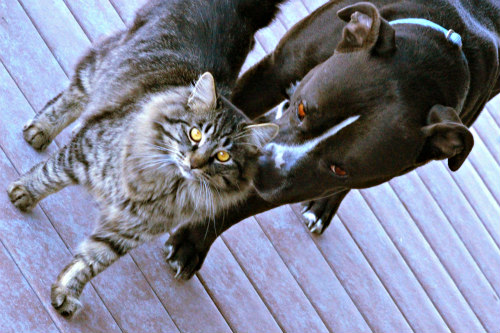 Sadly, according to PetSmart, “Nearly 7 million pets end up in shelters every year in North America. About 4 million will be euthanized due to overpopulated shelters – that's about 11,000 adoptable pets a day.” These statistics are the reason the pet product giant and service provider do not sell pets at their stores. There are just too many animals out their needing stable living conditions already to contribute to the problem. Opening your heart and home to an abandoned animal makes choosing a pet a much more selfless act. Using Emmett’s emoji-powered pet adoptions can make the process a whole lot simpler for people not up to touring shelters personally.

Emmett’s goal is for more and more animal rescues to get on board with the system. Right now, the San Diego Humane Society (SDHS) is the first shelter to start using Emmett for animal adoptions. While they’ve only been using it for a month or two, so far they’ve found that the thing they like best about it is how easy it is to use. By allowing people the power of pet adoption right at their emoji-texting fingertips, Dynamic Vision is hoping pet adoptions will increase. The company is said to be working on adding new add-ons and features daily, so this latest method of pet adoption could soon be coming to a shelter near you. Pet Adoptions Just Got Easier with Texting & Emmett: Looking for a dog or a cat? Use an emoji!

Shigetaka Kurita is the man who created the emoji as we know it in the West. They have become increasingly popular since their international inclusion in Apple's iPhone release, which was soon followed by Android and other mobile operating systems. Originally meaning pictograph, the word emoji comes from Japanese e, meaning picture, and moji, meaning character. If you’re already a big fan of the squirrely little characters, you know there are hundreds of variations to choose from. If you’re interested in animal emojis and how they appear on different operating systems, you can check out emojibase.com.

Dolphins Got A Ticket To Ride, But At What Cost?

Reversing The Import Of Elephant Trophies Is Based On Conservation?