Elton John & Edward Snowden Are Now Swimming With The Fishes

Betcha’ you’re thinking that with a headline like that, you might have missed some breaking news? What could this 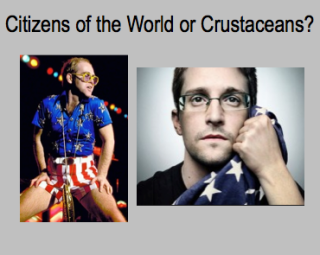 unlikely duo possibly have in common and why might they be found at the bottom of the sea, alongside Davy Jones’ locker?

Well, for starters, both of these larger-than-life personalities have had altercations with the law and documentaries produced about their controversial lives. One has fought against alleged illegal espionage practices and the other for Gay Rights.

However, none of that stuff matters as much as having scientific researchers bestow your name upon a newly discovered species - which in the case of both Edward and Elton just happened to crustaceans.’ Both of these world-known celebs both received that honor when two separate groups of biologists used their names to classify two new species this past week. 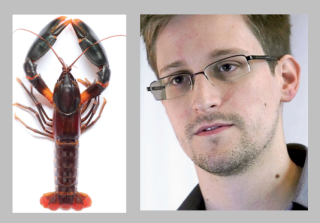 Cherax SnowdenSnowden was the first to crawl his way into the biology books when a crayfish was named ‘Cherax Snowden’ - which was then subsequently followed up by another study announcing the discovery of a new amphipod -- now called ‘Leucothoe Eltoni’ or ‘L. eltoni’ for short.

The discovery of the new Cherax Snowden crayfish was originally documented in 2006 by a collector in Indonesia who kept them for "ornamental purposes" because of their bright orange and "orange green" claw tips. Researchers didn't realize they were an unclassified species of crayfish until April of this year, when they received additional specimens from two retailers that sold freshwater invertebrates and were able to match their DNA to the specimens first acquired in 2006.

Independent researcher Christian Lukhaup, one of the researchers who discovered the crayfish, wrote in the study that he chose Snowden's name for this crustacean so he could honor "his extraordinary achievements in defense of justice and freedom." Sort of tongue-and-cheek he explained to The Washington Post he felt Snowden was more worthy of such an honor than, say, Justin Bieber or the Sham-Wow guy."

"We have so many species named after other famous people who probably don't do so much for humanity," Lukhaup told the Post. "I wanted to show support for Edward Snowden. I think what he did is something very special." 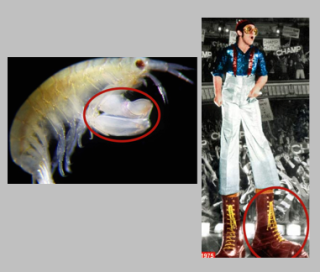 L. eltoni the Hawaiian Islands, possibly when some of them hitched a ride on a US Navy transport from the Philippines to Pearl Harbor in 1992. The amphipod lives inside other reef invertebrates, but without damaging its host.

James Darwin Thomas, a professor at the Halmos College of Natural Sciences and Oceanography at Nova Southeastern University in Ft. Lauderdale, Florida, says he had two reasons for using John's name to classify his amphipod.

"I named the species in honor of Sir Elton John because I have listened to his music in my lab during my entire scientific career," Thomas said in a statement released by the scientific journal publisher Pensoft Publishers. "So, when this unusual crustacean with a greatly enlarged appendage appeared under my microscope after a day of collecting, an image of the shoes Elton John wore as the Pinball Wizard came to mind."

So next time I think of crustaceans, now that I know the L. eltoni story, I think it’s inevitable that I’ll be subject to that ear-worm of a refrain that notes you ain’t seen nothing like him in ‘any amusement hall . . . that deaf, dumb and blind kid sure plays a mean pinball.”

As far as Snowden, I think crayfish who resemble miniature lobsters is the perfect animal counterpart. They're

known to be tenacious creatures who despite their many predators are able to escape and hide when in pursuit. Do I need to say anymore?

Train Your Terrier To Tune In For DOGTV! (Video)

In DC, Pets Are A Low Class Yokel Embarrassment