You'd expect to find elephants in the African Bush, but perhaps not in the UK, and certainly not at this year's Olympics to be held in London, July 27 - August 12, 2012. Nonetheless, training for the baton hand-off are two female African elephants, 20-year old "Five" and "Latabe," 19. Hailing from the West Midlands Safari Park, these two lively and affectionate pachyderms were ready for their "close-up" on the world's largest international stage.

"Five" & "Latabe"Apparently an elephant's trunk contains up to 100,000 muscles, and every one of those muscles were put to the test for this once-in-a-lifetime opportunity. With the eyes of the world watching, the Worcestershire Express from the Severn Valley Railway stopped in Bewdley on Thursday, May 24, where the elephants' were given the queue to present "Union Jack," the UK's national flag.

A video of their debut performance can be found on the BBC News site.

The actual torch bearer was 43-year-old Christopher Stokes
from Kidderminster who carried the flame on the train from Bewdley to Kidderminster.

The Olympic Flame will travel 136 miles on the first day of the Relay,
starting at the Land’s End Signpost in Cornwall and ending at the Hoe in
Plymouth for the first Evening Celebration. Sebastian Coe, Chair of LOCOG, said: "The start of the Olympic Torch
Relay is the beginning of an exciting summer of sport across the UK. The
Relay will last for 70 days and the Flame will carry with it the values
and spirit of the Olympic Games across the UK."

In another video, when Five was 3 years younger, a strong bond was created between this elephant and her keeper. Such affection in UK jargon is called, "besotted."

No word whether Betty White was at the ceremony in Bewdley, but the world's favorite nonagenarian is also known be besotted with affection for elephants. At a recent visit to the National Zoo in D.C, the TV star seems to have found a kindred spirit in the 64-year old "Ambika." 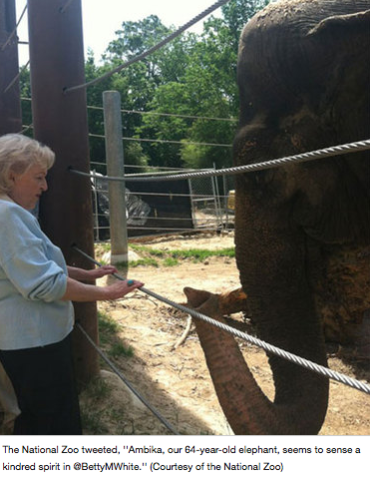 And while Five's and Latabe's have found and bonded with their special friends, their species have also been known to cuddle with the youngest at heart as well.

The Police Save the Day!!! The Crying Duck Animal Video of the Day!!!
PetsLady's Pick: Beautiful Wining Hummingbird Of The Day