While the massive southern elephant seal is an uncommon sight on beaches in the southern hemisphere, they are almost never seen playing in traffic. Almost!

This half-ton, 10-foot long behemoth decided to take a stroll through the seaside streets of Balneario Camboriu, Brazil. As the potentially dangerous giant lumbered through the busy streets, police, firefighters and concerned citizens kept the elephant seal hydrated by dousing it with water. Other than backing up traffic for over an hour and a half, the elephant seal returned to the Atlantic without incident. 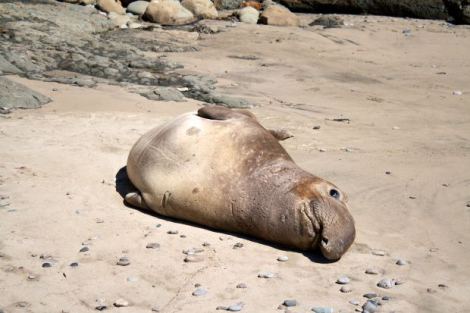 Elephant seals are one of the largest seals on the planet, and they get their name from the large trunk-like nose seen on males of the species. Southern elephant seals are naturally found along the Antarctic regions of the Atlantic, Pacific and Indian oceans. These large seals hunt a variety of prey, including fish, squid and crustaceans by diving underwater for more than 20 minutes at a time.

Cats in Tanks! Run! The Destructive Animal Video of the Day!!!
Comments