When the Charlie the cockatiel became a member of the household in 2002,
no one would have guessed that his presence would have led to grandma's
death. The bird had been bought as a pet for her grandson. A 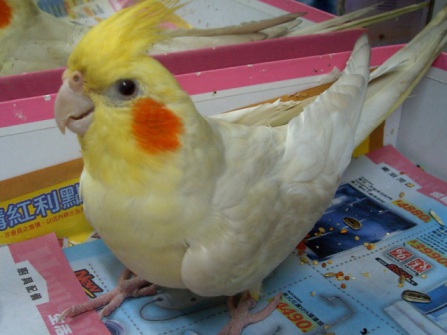 Cockatiel (Photo by annycheng/Creative Commons via Wikimedia)closer
look at her death from lung disease was triggered by the fact that she
had spent her working life employed in a cotton mill. An inquest
determined that the disease that killed her was not work-related.

Lilian Kershaw, 84, of Oldham, England, succumbed to a little known illness called bird fancier's disease. Even though she never handled the bird, cleaned the cage, or even spent much time in the same room with Charlie, she still managed to contract the disease. The rare disease comes from breathing in dust and protein that is emitted by the bird's droppings and feathers. It is theorized that the illness is actually a severe form of allergic reaction to these substances.

Prior to her death, Kershaw had been being treated for lung disease and congestive heart failure, and had been on oxygen for 18 months. Her breathing problems had originally been blamed on the damp conditions in a previous house. Last November she broke her collar bone and was admitted to the hospital. There her overall condition deteriorated until she passed away less than two weeks later.

The family is devastated and in hindsight regrets the purchase of the bird so many years ago. Charlie has now been passed along to a local bird sanctuary until a new home can be found for him.

The disease is rare enough that something must have made Kershaw particularly susceptible to the presence of the bird. It is hard to say what that may have been. Perhaps all those years working in a cotton mill did have an effect after all, or perhaps the damp in the previous house had a more lasting effect than anyone would have guessed. At this point everything would just be speculation.

Got Paranoia? Bird Detained In Egypt For Being A Spy
Pigeons -- The Animated Animal Video Of The Day!!!
Give Your Paws An Alternate Identity
Tips For Attracting Birds, Butterflies And Other Enchanting Wildlife To Your Yard
Comments