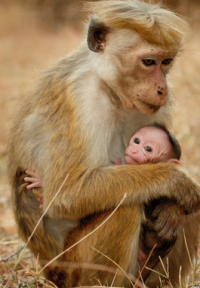 This year’s Earth Day not only gets the Disney treatment, it’s got one of Saturday Night Live’s leading comedy writers to do it justice. Hanging with a clan of macaque monkeys living in a Sri Lanka jungle, narrator Tina Fey follows the life and times of Maya, a female who’s low-ranking status excludes her from obtaining the finer things in (monkey) life. This is the basis for a full-length documentary, titled ‘Monkey Kingdom.’

When a matinee-idol "hunky monkey" named Kumar appears and starts showing this female some interest, Maya ends up of-all-things, pregnant. Unfortunately, when Kumar is shown the door by alpha macaque, Raja, she is forced to raise her baby son Kip alone. However, like most strong single human parents, Maya rises to the occasion, devoted to her child and willing to do whatever it takes to make a better life for him.

The formula plot is that old Hollywood story that's been told time and time again. And yet, this one is so endearing that it doesn't take away from the enjoyment. It’s where that little noble nobody — just a small cog in a very large machine, on the bottom rung of society — breaks out of the role society has assigned her, and rises to the top. (Think  Bette Davis in Pocketful of Miracles ~ 1961)

"For Maya, she's kind of like any female human, if you like, trying to do the best for her kid. But she's got the weight of macaque society pressing on her as well," Mark Linfield, co-director and producer of the documentary, tells NPR's Arun Rath. "And that's what made her such an inventive, ingenious monkey ... she had to use her street smarts to get out of this sort of social straitjacket that she was in."

If you're born into the top of macaque society, it's a bit like royalty — you're gifted with entitlement where you can eat from the ripest foods hunted for you. However, if you're one of those unfortunate souls conceived at the lower end of the pecking order, like Maya . . . well, you know, you really have to think on your feet, every second of every day.

Tina FeyTina Fey has entertained us for years, so we didn't expect her to disappoint in Monkey Kingdom.

Throughout, her narration, she imbues the humanity that the producers and director were looking for. Her delivery is playful, especially when she adopts the different animals’ voices and riffs on what they might be thinking. 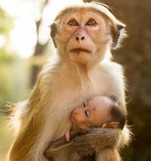 and fantasy. Most poignant is when she speaks of the tender love that Maya holds for her son, particularly when she embraces him as only an unconditionally-loving mother can do.

This may be an ‘formula’ Disneyfied version of nature, but it doesn’t matter, because by the time 82-minutes has elapsed, movie-goers will feel most satisfied to have had a chance to drop into the monkey kingdom!

Prehistoric Bugs! The Animal Video Of The Day!!!

Don't Do This! The "I'm Gonna Stick My Head in a Crocodile's Mouth" Animal Video of the Day!!!

Resurrection Biology For Those Who Think Extinction Stinks!
Comments