Cats were originally brought to Britain when the Romans invaded around
2,000 years ago. The local population quickly took to the little animals
and also began keeping them as pets. Recently an archaeologist was
going through thousands of fragments of ancient roof tiles when he
discovered the feline paw prints that had been pressed into the clay
when it was still wet -- around 100 A.D. 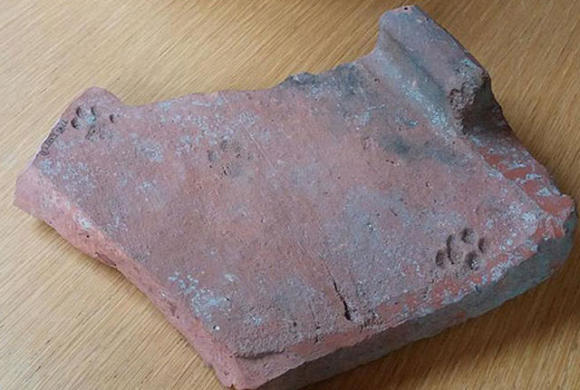 Back in those days the wet tiles were laid out in the sun to dry. In the past researchers had found the prints of humans, dogs, and even a pig's trotter. Though the tile fragments were found during a dig in Gloucester, England, in 1969, this was the first time that evidence of a cat had been found among them.

Since cats were new to Britain back then there weren't a whole lot of them around yet. However, they were obviously making their mark on their new world, and probably ticking off the tile makers as well. In other words cats had the same catitude back then as they do today.

The tile is now on display at the City Museum and Art Gallery in Gloucester.

Your Place For Halloween Dinner

Is Letting Your Pets Go To Pot, A Toke Too Far?