Dutch The Dog Is In Dutch With The Law

There is a big fight brewing in little Montrose, Colorado. At stake is
the fate of a dog named Dutch, an American Allaunt, accused of attacking
a woman back in November. The woman had struck him 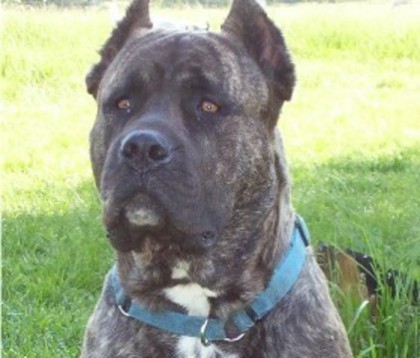 An American Allaunt (You Tube Image)with an aluminum pole from
a tiki torch in an attempt to stop a fight in her yard between him and
her dog. That was when the animal allegedly turned and attacked her.

Jeremiah Aguilar, a war veteran, claims that the large, muscular dog is a service dog for his Post Traumatic Stress Disorder. When he went to drive a friend to the airport he left Dutch in the care of his former owner -- the same woman who claims to have been attacked by the dog.

According to Montrose Animal Control and the Montrose Police Department the woman responded to a ruckus in her yard and found Dutch and a pit bull fighting. She first hit Dutch with her hands to get him to release the other dog, then grabbed the lightweight metal pole and strucj the animal again. She was finally able to get him to let go, grabbed him by the collar, and dragged him into the house.

Once inside the woman began to clean the blood off of Dutch's face. That was when she says that the dog bit her in the thigh. She then had to use both hands to pry him off of herself.  When she turned to make a run for safety in the bedroom Dutch lunged at her, biting her again in the backside. This time when she struggled to free herself she was bitten in the hand, breaking a finger and severing an artery.

The woman was finally able to shut herself in the bedroom and called her fiancé for help. She claims that she did not call the police for help because she was concerned that Dutch would attack them. When her fiancé and another man arrived on the scene they found Dutch sitting quietly amid a fair amount of destruction to furniture. The pit bull had entered the house with the men and Dutch attacked it again.

The woman was taken to the hospital and Animal Control was notified. Her medical bills have totalled $24,000.

Aguilar claims that Dutch has never shown any signs of aggression and must have been provoked. He says that Animal Control has recommended that the dog be euthanized, but that is not a done deal. The court can also order retraining for the animal.

Aguilar is due in court on February 14. A Facebook page in support of Dutch has been started and he has been received messages from as far away as Australia.

Got It Ruff: The Top 10 Dog & Cat Cones Of Shame
This Holiday Dinner Has Gone To The Dogs! The "What's The Cat Thinking?" Animal Video Of The Day!!!
GoPro Has Added GoFetch Functionality For Dogs & Their Masters
Comments