Several methods have been developed, and several others have been sardonically suggested, to get rid of pesky drones hovering
above.  One innovative solution to a drone problem in The Hague, capitol
of The Netherlands and home of the United Nations headquarters, is the
use of birds... big birds... birds of prey.  A Dutch bird-training
company, Guard From Above, and the Dutch National Police have partnered
to get the unwanted interlopers out of the skies without damage to the
attacking birds or the drones. 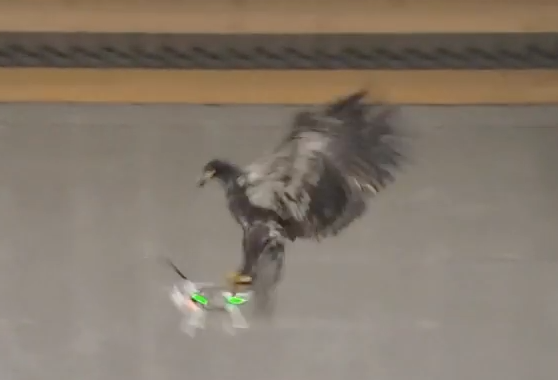 Eagle swoops up drone in Guard From Above demonstration

This eagle seems to relish the task of capturing the drone in flight,
so he must be getting some tasty rewards for accomplishing the feat....

Could a crow down a drone?

Guard From Above is training eagles, as well as other birds of prey to down drones.  If you're wondering if it wouldn't be great to use the pesky crows to down pesky drones, forget it.  Crows are not birds of prey.

Birds of prey, or raptors, hunt and feed on other animals; we all know that crows will eat anything! 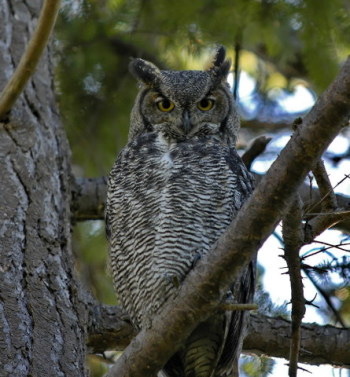 Birds of prey tend to have strong talons and strong beaks for catching, holding, and tearing apart their prey.  Raptors have exceptionally good eyesight, especially nocturnal owls.  Additionally, birds of prey are usually considered the alpha of their species and you could hardly call crows alpha birds.  (There's a very fine entry about birds of prey on Wikipedia.)

So, we'll have to find another job for crows....

A big concern of the public has, of course, been the safety of the birds.

Their trainers say the birds' talons are not harmed by the drone, and in the longer version of the demonstration video, it looks like the eagle's talons are fine.  Nevertheless, the Dutch National Police is bringing in the Dutch Organization For Applied Scientific Research to insure that the birds are not hurt.

Of course, birds would not be used in situations where it would be dangerous to them.  But could they, perhaps, be fitted with a device that would warn them of particular dangers?

The Dickin Medal: Top Honors For Animals In War

Pigeon Post Reboots Carrier Pigeons To Make Mailing More Fun
Animals Inside Out: An Educational Exhibit, If You Can Stomach It

This Cockatiel Has Rhythm
Comments