Ducks Take A Trip To The Pharmacy

It was a case of fowl play when a flock of 50 ducks descended upon a
pharmacy in Saratoga Springs, New York last month. No one is quite sure
why the avian horde appeared in the store. Perhaps they thought there 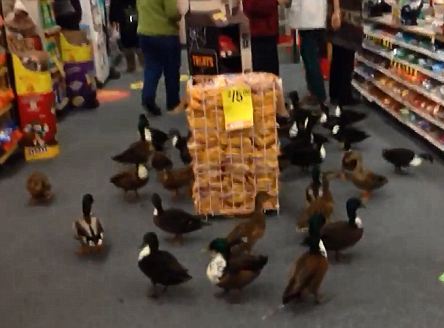 Ducks doing a little shopping (You Tube Image)
was a sale on Toilet Duck. Or maybe they wanted to stock up on quackers.
It was a totally flocking weird experience for both patrons and
employees.

On Thursday, October 24, 2013 the large number of ducks entered the CVS Pharmacy through a couple of automatic doors. Employees tried to shoo the feathered gang back out again, but they were having none of it. They waddled through the aisles, browsing the aisles, and checking the place out.

One of the employees finally hit upon the smart idea of offering them some popcorn (Smartfood, of course) and managed to coax them back out of the store. Apparently all they had come in for was a snack. Once thusly appeased they were ready to be on their way. As for the cost of the incident one can't help but wonder if one of them asked the pharmacy to put it on his bill.

As for the ducks, they found that human life isn't all that it's quacked up to be.