It is a strange fact of life in Chulmleigh, England, that the local
celebrity is a duck that wears a bow tie. The duck is known for waddling
around town and visiting various pubs for a pint. The bird came to blows
in a bar fight with a dog. It's not something you see every day, or any
day. The duck lost the argument but saved his beak -- barely. 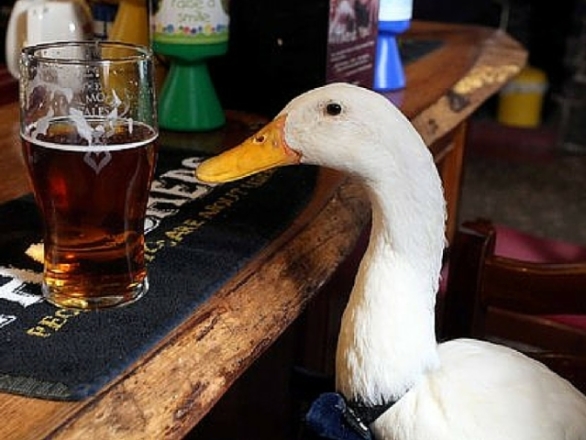 Star at the Pub

It does sound a lot like the beginning of a bad joke, but it was all too real. The duck's name is Star and he follows his owner, Barrie Hayman, all over the place and is beloved by one and all. Hayman also has a dog, Meggie, who also makes the journey. She hits the pubs more for the social aspect than for the beverages. Some of the pubs have even designated a chair just for Star

When Star was just a chick, Hayman would walk around with the bird in his top pocket. Naturally Star grew too large for this mode of transport and started following Hayman instead. Along the way he also developed a strong taste for ale and, like so many humans, he tends to overdo it a bit, which can't be hard for a bird. 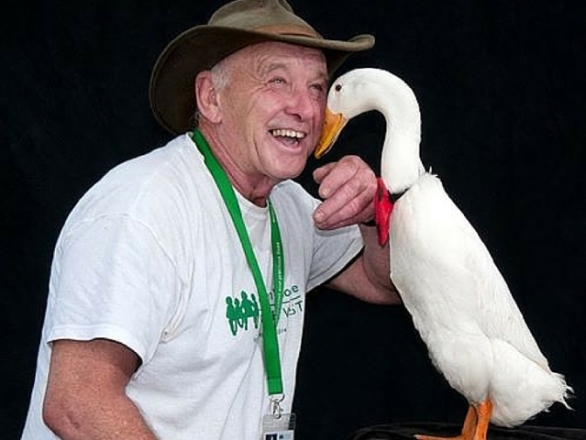 Last October the trio stopped in at The Old Courthouse Inn for a pint of the brew. Star had a bit too much and was up to his drunken antics. That was when he made his nearly fatal mistake. He cast a boozy eye at Meggie and leaped onto her back. The dog had had more than enough of the duck's drunken display and she snapped at him -- literally. 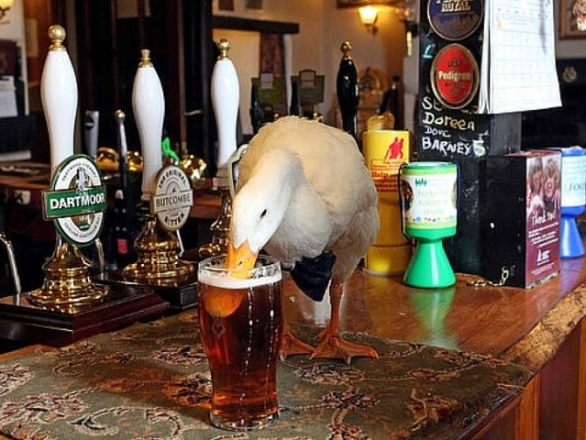 Star Getting a Snootful, er, Beakful

Star was on the losing end of this barroom brawl. His bottom beak was split down the middle. Hayman rushed him straight to the vet. There the duck was put on painkillers and anesthesia while his bill was mended. Hayman and his wife Sue had hours of worry over their avian friend but he is now fine. Star and Meggie have even made up, though Star probably needs to keep his distance when he's been drinking. 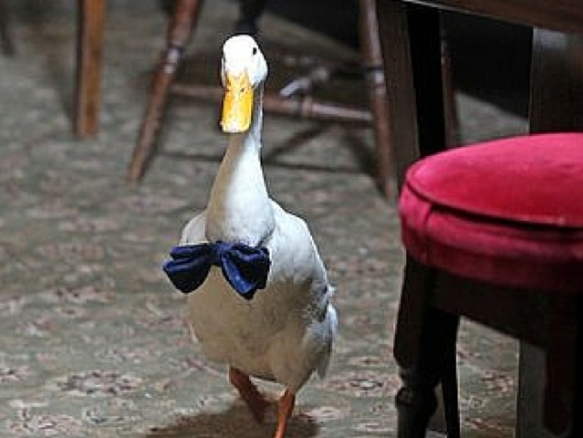 In Chulmleigh all is right with the world now that Star is back on his webbed feet again and entertaining the local residents. After all, what would everyone do without the most famous among them? And now they all have a really good story to tell to boot.