Drunk In The Trunk: Elephants Go On Rampage With A Snootfull

Earlier this month news came out of India that a group of elephants,
lured by the scent of alcohol made from the flowers of the mahua tree,
came out of the forest looking for a party. They raided the store where
the 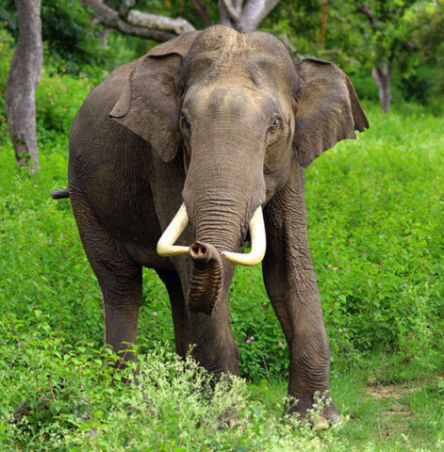 Asian Bull Elephant (Photo by Yathin S Krishnappa/Creative Commons via Wikimedia)alcohol was stocked and downed 500 liters (132 gallons) of the stuff. Unfortunately the party didn't stop there.

The 50 pachyderms were not satisfied with the drink limit and went on to ransack neighboring buildings in search of more of the potent potable. After destroying the shop and other buildings the villagers of Dumurkota were able to drive off the drunk and disorderly behemoths. From there forestry officials tried to get them to cross a nearby river to distance them from the human population.

The herd of 120 elephants total was apparently just in town for the weekend, normally living in another town nearby. The local police recruited the help of the villagers in driving the herd back to their home territory.

When drunk elephants react much like humans and become aggressive and out of control. Police commented that the beasts were bound to have "one heck of a hangover," once the alcohol wore off. Perhaps the elephants thought their pachyderm party was worth it.