Don't Pet The Pigs: Swine Flu Is Back 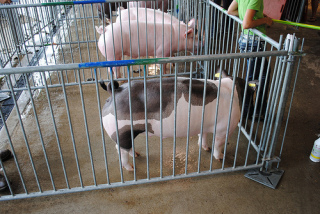 Pigs at Delaware state fair, 2012: Photo by Lee Cannon at flickr.comSwine shows are continuing at state fairs this year, but fair-goers are
warned not to pet the pigs; swine flu is back. This is what the
Centers for Disease Control (CDC) is saying about the virus, which has increased 5-fold to 158 cases in one week....

1.  This is a new strain of swine flu that is not of pandemic nature at this point.

3.  All cases have passed from swine to human, and most human cases have occurred from contact with swine at fairs.  As the virus continues to spread, however, human to human contagion will doubtless occur.

4. This strain of swine flu does have a gene in common with the 2009 swine flu that became a pandemic, but so far, cases have been relatively mild.

Pigs exhibit signs of flu just like humans, by coughing, sneezing, and runny noses.  CDC recommends washing hands, keeping human food and drink away from livestock barns, and keeping children and elderly persons, as well as others with fragile immune systems, away from livestock altogether.

Health
News Stories
Pigs
Science
Cats Gotta 'Go,' You Gotta Clean It Up! Here's A No Mess, No Smell Way To Do It

"SNUFFLE MATS" Make Dining Fun & Stimulating For Your Dogs
Who Stresses Out More In Performance, The Rider Or The Horse?
Bissell BARKBATH QT: A Smart Way To Bathe Your Dog (w/video)
Comments