Many people are familiar with their cats bringing home their dead prey
to share with them. It is not at all uncommon for the domesticated
animals. However, researchers are finding more and more evidence of some
wild dolphins giving gifts of eels, squids, octopuses, and various fin
fish to the occasional human. While it isn't 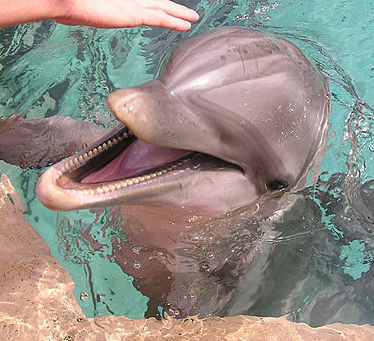 Dolphin (Photo: Creative Commons via Wikimedia)exactly the sort of gift a
human goes for, it is still a flattering gesture.

An article describing this rare form of gifting behavior in dolphins was published on December 4, 2012 in the journal Anthrozoös: A Multidisciplinary Journal of the Interactions of People & Animals. Over the past few years at least 23 instances of dolphins passing these food gifts along to humans were noted at the Tangalooma Island Resort in Australia.

Food sharing among members of the same species is not unknown, but cross-species sharing is very uncommon in the wild. A single similar incident was reported by an underwater photographer in Hawaii who was approached by a false killer whale while on a shoot. The whale dropped a mahi mahi in front of him and backed off. The photographer accepted the fish and then gifted it back to the whale.

The dolphins engaging in this behavior are all participants in a program at the resort in which the staff wades out into the ocean each evening to feed the dolphins. The program is allowed by a permit issued by the Queensland Department of Environment and Resource Management. The cetaceans may be engaging in mimicking behavior since the humans they are gifting the food to are the staff members of the resort who feed them.

Food sharing among dolphins is often motivated by a desire to play, so there is also the theory that the gifts are an invitation to play. Scientists believe that the play theory is most likely what is happening in these instances.