Dolphin Tale’s Aquarium Says NO To ‘Show Must Go On’

In the literal and figurative wake of the controversy that emerged at SeaWorld, and the subsequent film 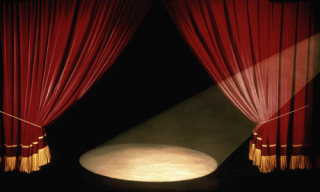 “Blackfish” that documented it, it’s not surprising that the Clearwater Marine Aquarium in Florida decided to bring down the curtain on using dolphins for entertainment purposes.

As the location used to film both “Dolphin Tale” and “Dolphin Tale 2,” aquarium officials say rehabilitation and marine rescues, not entertainment, will be the focus of their new $68 million downtown aquatic center, according to a CBS report.

The movies were inspired by the real-life rescue and rehabilitation of Winter the dolphin, who was fitted with a prosthetic tail in 2010, and the sequel scheduled to hit theaters this month focuses on another dolphin calf named Hope. 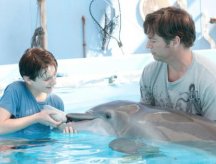 Actors Nathan Gamble & Harry Connick,Jr and WinterAs a result of this important humanitarian decision, the aquarium cut their construction costs for the new center by nearly $100 million, simply by eliminating a dolphin entertainment stadium.

“We don’t rescue them to perform for our guests,” aquarium CEO David Yates. “Our goal is to release them back into the wild.”

Presently, both Winter and Hope reside at the aquarium, and their new tank will be three times the size of their current home. Guests will be able to view staff working with the dolphins and rescued sea turtles from platforms and walkways.

“We’re not about the big shows and stuff like that,” Yates said. “The whole essence of this thing is no matter 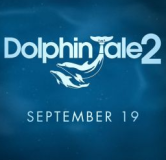 what animals we have or don’t have, the experience of getting behind the scenes of our work, that’s going to be the draw long-term.”

With SeaWorld’s stock plummeting exponentially since the release of the movie Blackfish, other aquariums are following suit with Clearwater's business model.

The Virginia Aquarium is developing a new exhibit showing its stranded marine animal rescue program, and demonstrates to its guests how its staff cares for injured animals.

The National Aquarium in Baltimore is considering scrapping its current dolphin exhibit and moving the animals into a sanctuary.

Yates said the Clearwater Aquarium is not trying to make a statement about the practices of other marine parks. “We’re not trying to win a popularity contest. We’re just trying to do what we do and do our mission,” he said.

At a news conference last month, videotaped testimonials from “Dolphin Tale” stars attested to the importance of the aquarium’s work. “The whole mission is rescue, rehabilitation and release,” said actor Harry Connick Jr. in this video clip.

high for other operations of this type to follow. See you at the movies!