Dogs Who Bark At The Moon, Might Really Be Protecting You From A Blimp [Videos]

It's long been believed that dogs are prone to bark at the moon. Myths and literature have long paired dogs and the lunar orb. Hecate, Greek Goddess of the moon, kept the company of dogs. Same thing goes for Diana, Roman goddess of the moon and the hunt. Norse mythology tells of a pair of wolves that chase the moon and sun to summon night and day.

However, now that dogs are domesticated and have adjusted to the comings and going of the moon -- save perhaps that occasionally Super Moon (see: "Can Super Moons Create Super Pets?") -- might a dog be barking at something else? And just might that something be "blimps?" 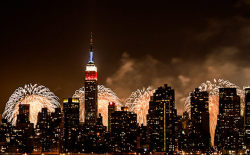 This thought recently occurred to me on Independence Day as I awaited the arrival of Macy's Fourth of July Fireworks' display on the Hudson River, with a maddening crowd of a thousand or so celebrants. When the dependable Goodyear blimp made it's traditional swing over the skyline, a Black Labrador started barking incessantly as the airship came closer and closer to our strategic look-out point on the banks of Hoboken, New Jersey.

While the crowd roared in laughter, the dog got so obsessed, I kind of wondered whether he was interpreting the blimp to be some form of prey or threat? Might the dirigible have resembled something to hunt such as a pheasant or might he be signaling his masters of imminent danger?

In conducting some online research, I actually validated that this Lab was on to something, as a simple Google search of "dog barking at blimps" surfaced a good number of blogs and video stories that documented the same type of behavior.

"Two Brown Dogs"Writer and social media manager, Amanda LaRiviere wrote in her blog, "Two Brown Dogs," that one of her chocolate labs got somewhat D-listed in her neighborhood when he started barking "like a total nut."  And he wasn't barking at a cat or dog, he was wailing at "a Giant Blimp in the sky!" noted LaRiviere.

"He barked and he howled and he growled, while a crowd of people stood around laughing hysterically as he protected all of Brooklyn from the big bad blimp," she added.

And it appears that "Goodyear" isn't the only big bad blimp that throws dogs into a tailspin. A woman, identified on YouTube as "MomOf3BlackLabs" captured her black lab "Duke" barking at the "MetLife" Blimp on New Year's Eve. This short 1-minute video shows him barking but then suddenly becoming somewhat self-conscious when he realized his antics were being recorded.

It also appears that a blimp doesn't even have to be in the sky for a dog to go into a rage. In this vid, titled, "Bowie Versus the TV Blimp," Bowie states emphatically (given creative license by his master): "Hi, I'm Bowie, the dog and I hate the Goodyear Blimp. It just really pisses me off. So I bark at it."

So while it seems conclusive that dogs and blimps just don't mix, I got to wondering if it was the shape of the aircraft or if in a dog's mind, it resembled another foe, canines are known to have issues with.

Well, it didn't take me long to surface a possible answer, after I viewed the "Nyan Blimp Cat" video. Dogs do not only hate cats, they hate the idea that they've learned to fly?