Dog Wedding Is Most Expensive Ever: Enters Guinness World Records 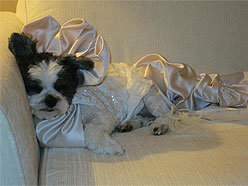 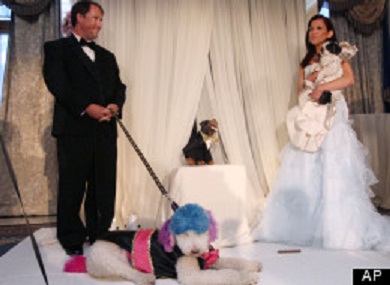 Chilly Pasternak (left) and Baby Hope Diamond marry in the most expensive pet wedding ever!: AP image via huffingtonpost.com

Officiating the wedding ceremony was Triumph, the Insult Comic Dog.

The wedding celebrated the life of Lucky Diamond, a Maltese who had canine cancer and passed away very recently.  She was originally betrothed to Chilly, but her foster sister, Baby Hope, took her place.  Both Lucky and Baby Hope were adopted from the Humane Society by animal activist Wendy Diamond.

Lucky also made it into the Guinness World Records for being the pet most photographed with celebrities - all in the cause of pet rescue.  This video is part of the tribute to Lucky....

Baby Hope's gown was made by designers Henry and Michelle Roth.  The reception featured sushi and live jazz, and Ellen DeGeneres provided a pet food buffet. 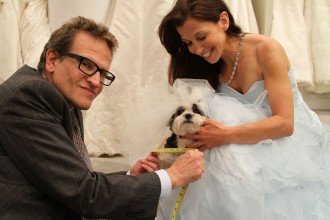 Baby Hope Diamond at her dress fitting: image via animalfair.com

Pet guests were not charged admission to the fancy affair, held at the Jumeirah Essex House Hotel in Central Park, but human attendees forked up $250 each as a donation to the Humane Society of New York.

Easily Play With Your Dog At Night With These 4 Chuckit! Max Glow Toys (w/video)
Shit Happens! Why Not Have A Fun Place To Put It?