Pets have really become involved in politics this year.  Some cats, like Hank, who is running for Senate in Virginia, and Fat Cat, our Russian friend who recently lost a very close election to Vladimir Putin are directly active in political races.  U.S. dogs are doing their 'bit,' voting for President this year by roughing up political chew toys of the candidates, but only some have heard about Romney's dog, Seamus.... 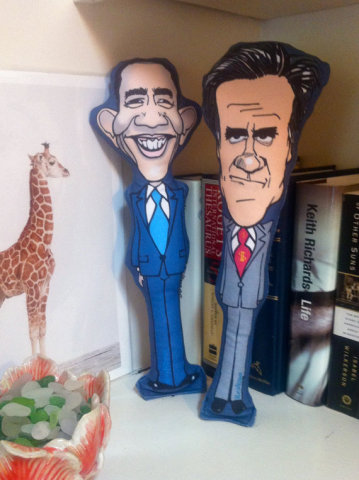 Dogs get to vote with their bite on these chew toys of Obama and Romney: designs by Ella & Anni

It's not above toy manufacturers to make a buck or two off our pets' love for chew toys and our passion for politics, but some private individuals are using the occasion of the presidential election season to raise money for pet causes.

Hank The Cat and Fat Cat teamed up to make and sell novelty two-dollar cat bills with proceeds going to a pet shelter in St. Petersburg, Russia. And Annika Sandback and her dog, Ella, have combined their talents to produce four stuffed dog chew toys in the likeness of Barack Obama, Mitt Romney, Rick Santorum, and Newt Gingrich, to raise money for the North Shore Animal League in New York City - the largest no-kill animal shelter in the world.  All profits from these sales are going to the shelter. 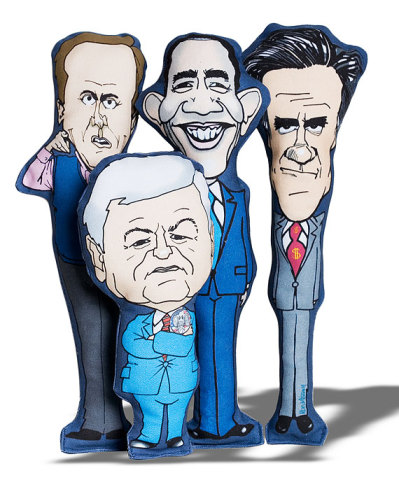 Pick any one or all of EllaAndAnni's candidate chew toys - Bow-Wow Barack, Mitt For Mutts, Ruff Rick, and Old Dog, Newt Tricks - and let your dog exercise her right to vote, with her teeth.  Your money will go to save the lives of pets, no to euthanize them. Ella knows that; she's still alive because of the North Shore Animal League.  Purchase them at EllaAndAnni's Etsy store.

Dogs Get Goofy Over This Spine-tingling Hedgehog Chew Toy

PetsLady's Pick: Funny Snow Dog Of The Day
Who Forgot To Feed The Dragon?
Comments