Dogs Take On A Cougar And Win!

A couple of weeks ago two dogs in Victoria, British
Columbia, took on the task of defending their human's property when a
hungry cougar approached. Kovu and Teaka double-teamed the big cat with
circling 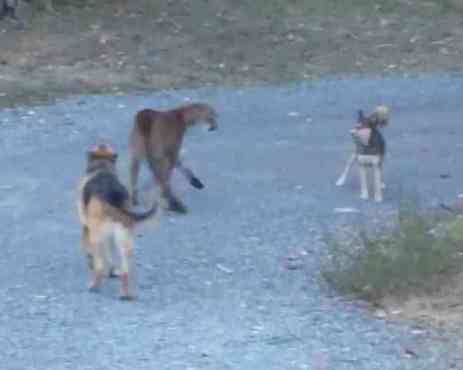 Dogs Face Off With Cougar (You Tube Image) and barking. While the cat hissed its intentions to defend
itself while cautiously trying to make a slow, graceful exit.

The standoff was filmed by Chris Ross as he watched the animals in amazement. The cougar finally took off with the dogs in hot pursuit. Ross was criticized for filming the incident instead of making sure that the dogs were safe, but the dogs obviously had the situation under control. Of course, if he had gone out there he would have also put himself in danger.

When the cougar darted off Ross did put down the camera and went after the dogs. Kovu and Teaka were called off and put inside while the cat, which had been treed, was chased off of the property. 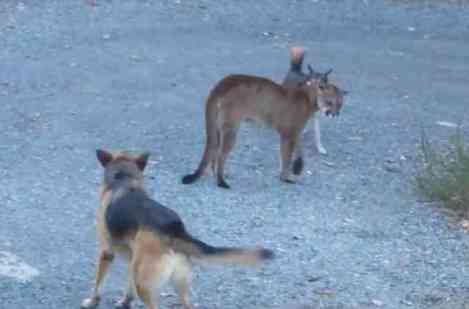 Dogs Face Off With Cougar (You Tube Image)In recent weeks there have been a number of cougar sightings in the area of Victoria. This incident occurred just a few days after the police there had issued a warning to residents and businesses. The big cats have even been spotted in downtown areas of the city. That animal was never found, but the sighting was considered credible.

People who see a cougar are encourage to call 911. That is good advice wherever you live, not just in Victoria. If your dog or dogs confront a cougar do not go charging into the fray. You are just as vulnerable as your pet.

Cat Adoption: Are You Ready?

Well... This Makes Going For A Walk More Interesting -- The Animal Video Of The Day!!!
Comments